In an effort to bring a semblance of joy amidst uncertainty, several groups of protestors broke out into dance as they demonstrated. 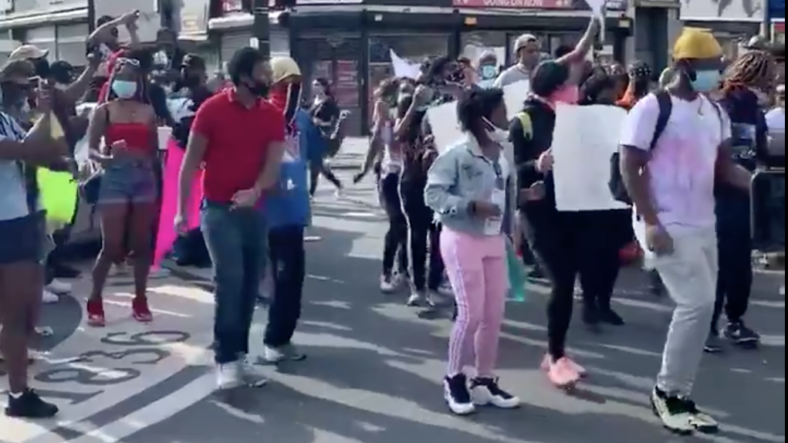 Many news outlets have been focusing on various pockets of violence erupting across the country, sparked by civil unrest related to the deaths of several African Americans over the few last months.

However, social media is being a friend to the movement by sharing feel-good clips —showing the very best human nature stories — oftentimes buried in endless stories of upheaval.

Protesters have used their bodies as barriers to protect those who might otherwise be seen as their enemies. Some have reached out with extreme acts of kindness, providing water and food for those exhausted in their commitment to justice. Some have chosen to find a semblance of joy through song and dance to alleviate the angst they may be feeling.

Various groups have broken out into dance, possibly paying tribute to the lives of Ahmaud Arbery, Breonna Taylor, George Floyd, and the many other victims who have lost their life to police-inflicted carelessness or violence and have gone unnamed.

In Newark, the city with poet Mayor Ras Baraka at the helm, protestors rocked out to the “Cupid Shuffle” over the weekend. In a clip shared on social media, the demonstrators make the traditional dip in the dance sequence, as a woman calls out “The news ain’t gonna show this.”

On the corner where Floyd was murdered, 38th and Chicago in Minneapolis, “Set It Off” by Lil Boosie was the soundtrack. In a video, the brothers are circled up and bouncing, enjoying a high-energy dance in their hip-hop context.

The Godfather of every Black gathering, Frankie Beverly, could be heard in an evening hour in Morristown, New Jersey over the weekend. Multiple generations of protestors paused to dance to “Electric Slide.” (Of course, Beverly’s anthem is “Before I Let Go.”)

The outburst of unscripted, disorganized, and organic joy amid protest is not new, but it is most welcomed amid civil unrest in the U.S.

In fact, several movements throughout history have used singing, dancing, and art as ways to protest injustice, specifically the civil rights movements that had a soundtrack of singing as they marched. Amanda Machado, activist, writer, and artist, has put forth in many of her lectures that being joyful is actually its own form of protest, especially if the oppressor expects you to be violent or overwhelmed.