According to witnesses, police left a double amputee without his prosthetic legs and in need of help during a protest in Columbus. 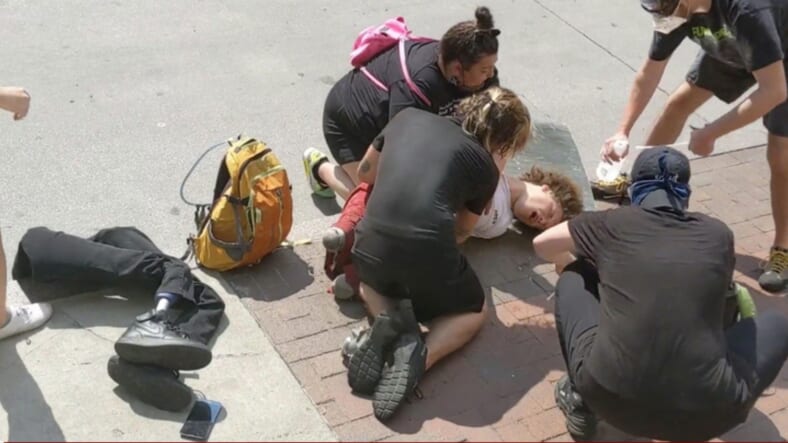 There is public outrage in Ohio after local police were spotted blasting a double amputee with pepper spray during a protest and then allegedly trying to take away his prosthetic legs.

According to TMZ, on Sunday, witnesses say an unarmed young man who wasn’t aggressive was attacked by Columbus police officers during a peaceful demonstration. They first pepper-sprayed him and then callously disconnected his legs.

Stunned protesters then rushed the cops and demanded they return the man’s legs as he reportedly crawled around, distraught, on his hands seeking medical attention. Even though the protesters were also maced, a video shows them successfully retrieving his prosthetics.

CPD just hit and maced a double amputee. Bravo, you heroes. Unarmed, no legged, they dgaf from r/Columbus

Earlier in the week, Mayor Andrew Ginther released a statement assuring the public that there had been a ban on using pepper spray against non-violent protestors, an assertion that the City Council also stood behind.

Additional video shows that not only was this ban violated, officers also used their bikes as battering rams to attack the crowd.

READ MORE: Injuries at protests draw scrutiny to use of police weaponry

NOW: Things have taken a turn here. Police came to intersection and tried to push crowd out with bikes. This happened. @nbc4i pic.twitter.com/HnHxYWkR0l

And even more video shows Columbus police also pepper-spraying a crowd of protestors in seeming defiance of the mayor’s mandate.

Demonstrations have been taking place around the country since Memorial Day in the wake of George Floyd’s death during an arrest by the Minneapolis police. Since then, protests have happened in all 50 states, and corporations and sports leagues including NASCAR, the NFL, Google, Amazon, Cadillac, Condé Nast and others have shown open and vocal support of Black Lives Matter.