The activist went viral after her comments resurfaced 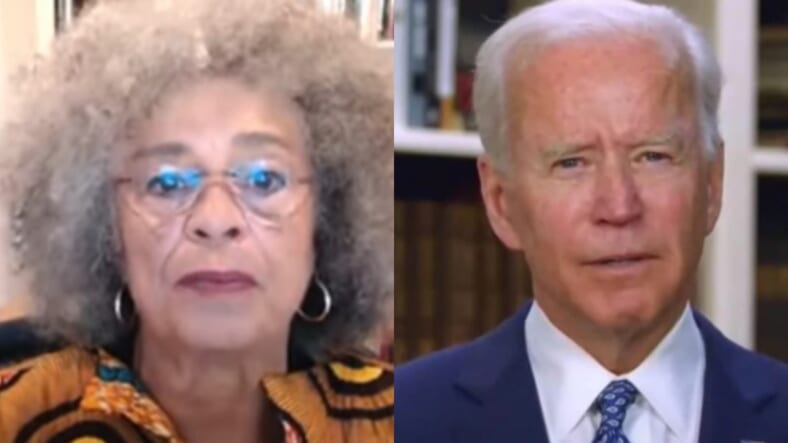 Legendary activist Angela Davis has been trending this week after a video resurfaced of her explaining why she was throwing her support in the 2020 presidential campaign behind Joe Biden.

Monday, the beloved Marxist intellectual who has championed for social justice for decades, made waves on social media after an interview she did weeks ago suddenly re-emerged and went viral.

In the clip, she explained that neither Biden or President Donald Trump reflects her political views. However, she was rallying behind the former vice president because it was crucial to back the candidate “who can be most effectively pressured” by the left.

“Biden is very problematic in many ways, not only in terms of his past and the role that he played in pushing toward mass incarceration, but he has indicated that he is opposed to disbanding the police, and this is definitely what we need,” continued the University of California Santa Cruz professor emeritus.

She then noted, “Biden is far more likely to take mass demands seriously,” more so than President Trump, adding he was also, “far more likely than the current occupant of the White House.

READ MORE: EXCLUSIVE CLIP: ‘Toni Morrison: The Pieces I Am’ illuminates the life and work of a living legend

“This coming November, the election will ask us not so much to vote for the best candidate, but to vote for or against ourselves,” concluded Davis. “And to vote for ourselves I think means that we will have to campaign for and vote for Biden.”

In response to the video, which originally aired on June 15th, some applauded Davis for her objectivity, with one poster tweeting, “Angela Davis is trying to teach you dummies that strategy is separate from ideology. You need a means to achieve your ideas and the 2 might not always align. Without strategy the most you can achieve is feeling special and superior on the internet.”

But others were still hesitant, and pushed back, “I don’t like that Angela Davis is now being weaponized against people who don’t support Biden when she never formally endorsed him and simply answered a question about how she would personally engage with an election where neither option promises a route to radical change.”

But #OscarsSoWhite creator April Reign seemingly summed up the sentiments of most by pointing out, “I don’t understand how anyone can read this, or listen to what ANGELA DAVIS has said recently, & not understand. We’re not voting for Biden as much as we are voting for ourselves. For the ability to redefine our future w/ someone in the WH who we can pressure into change.”