In an ongoing social media feud, Odom struck back at Thompson over the former love they have in common: Khloé Kardashian.

In an ongoing social media feud, Lamar Odom is striking back at Tristan Thompson over the former love they have in common: Khloé Kardashian.

The 41-year-old retired NBA player retweeted a message that read “NBA Twitter watching Tristan Thompson pretend to act tough on Lamar Odom.” The post was accompanied by a GIF of several NBA payers struggling to keep a straight face as Fergie sang the national anthem at the 2018 All-Star Game.

Their online feud kicked off when Odom left a comment under a photo of his ex-wife, writing, “Hottie.” Thompson replied, “God brought you back the first time. Play if you want, different results.”

The thinly-veiled threat seems to refer to Odom’s overdosing at a Nevada ranch, where he nearly died after suffering a stroke in 2015. 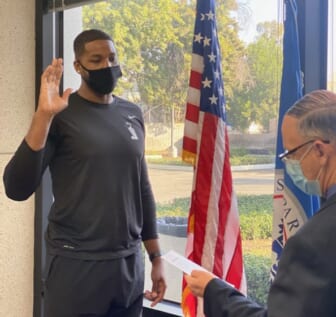 Thompson, 30, and Kardashian, 37, share a 3-year-old daughter, True. Their on-again, off-again relationship has been a storyline of the Keeping Up with the Kardashians reality show for years. Odom was married to Kardashian from 2009 to 2016 and co-starred with her in the third Kardashians spin-off, Khloé & Lamar, for two seasons a decade ago.

An insider recently told People magazine the couple are not currently together, saying, “For now, Khloé is single and seems okay with it. She continues to co-parent with Tristan, and they spend time together as a family. Even though he has disappointed Khloé so many times, she is still very loyal to Tristan.”

“She doesn’t like when people criticize him,” the source added. “He will always be special to her. It’s very possible that they will get back together eventually.”

Despite their split, Thompson has also been leaving flirty comments under Kardashian’s photos, which, according to the source, has left the 37-year-old “confused.” 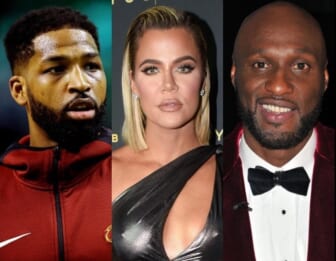 The couple famously broke up after Thompson was seen canoodling with one of Kylie Jenner’s close friends, Jordyn Woods, in 2019. As previously reported, Kardashian addressed the issue last month on Keeping Up With the Kardashians: The Final Curtain.

“I don’t have any grudge against Jordyn,” she clarified. “I think people make mistakes, people live, and they learn.”

“I have to forgive these people for me,” Kardashian continued, “and it’s up to them to forgive themselves and be accountable and learn and hopefully don’t repeat these same cycles. When pressed, however, she claimed Woods never formally apologized to her.