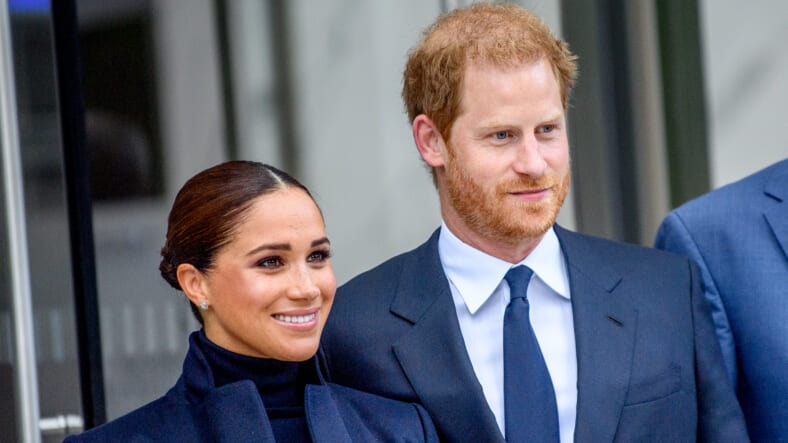 At first blush, the Duke and Duchess of Sussex’s trip to New York City didn’t have the usual trappings of a royal tour. There was no media briefing at the palace to review the itinerary weeks in advance. The release of Mayor Bill de Blasio’s public schedule last Wednesday was the first warning that Prince Harry and Meghan Markle’s trip to New York would include more than an appearance at the Global Citizen Live concert.

The trip may have started with a whimper, but it ended in a roar — the roar of cheers from a crowd 60,000 strong as the couple took the stage and effectively took Manhattan.

Once the Sussex team landed in New York, the events had a familiar feel and pace. There was the welcome photo op with local government officials; New York Governor Kathy Hochul along with Mayor de Blasio and his family. Not quite as cute as photos from the 2018 Dublin visit with Irish President Michael D. Higgins and his Bernese mountain dogs, but what the mayor lacked in fur, he made up for in charm.

National Memorial? Check. They enjoyed a private tour of the 9/11 Memorial. Sample the local fare? Check. Harry’s introduction to fried chicken and waffles at Melba’s in Harlem was one for the history books. All that was missing was a royal walkabout, a Sussex signature, but the woman yelling, “You look so beautiful, girl. I love you boo,” as Meghan and Harry left the One World Observatory, was happy to improvise.

Prince Harry and Meghan seemed to be picking up right where they left off before the pandemic. New team. New foundation. New city. But ostensibly, they were doing the same work. It’s the rest of the world, including those in the palace, that are still trapped in the old paradigm. Rewind seven months to February when the Queen confirmed that, in stepping back as working royals, Harry and Meghan would forfeit the “duties that come with a life of public service.”

A Sussex spokesperson swiftly clapped back that “We can all live a life of service. Service is universal.”

The idea that public service is the sovereign territory of the Royal Family is laughable in it’s arrogance, especially when we’ve all spent the past 18 months celebrating the service and sacrifice of frontline and essential workers. In his interview with James Corden, Harry explained, “My life is always going to be about public service. Meghan signed up to that. And the two of us enjoy doing that.”

Still, without their HRH, royal patronages, or the authority of the Crown, many were dismissive of their ability to have a meaningful impact.

Ironically, when she got engaged, Meghan gave up an ambassador role with One Young World that had already placed her in the same circles as Canadian Prime Minister Justin Trudeau and former President of Ireland Mary Robinson. Her humanitarian work in Rwanda, UN Women and World Vision was similarly shelved. All positions she secured on her own merit when she was just that actress on the cable TV drama, Suits, and running her lifestyle blog.

Meetings during last week’s UN General Assembly with U.S. Ambassador to the United Nations Linda Thomas-Greenfield and UN Deputy Secretary General Amina Mohammed must have felt like a homecoming for Meghan. The former UN Women’s advocate for Political Participation and Leadership had already proven that she could hold her own in those spaces. Why would the loss of a royal seal of approval prevent her from reentering?

A post shared by The Duke and Duchess of Sussex (@sussexroyal)

‘The Firm,’ as the Royal Family is popularly called, was even more short-sighted in their assessment of Harry’s prospects without taxpayer funding. After nearly two decades of public service as a prince of the United Kingdom, did they expect world leaders to stop taking his calls? New phone, who dis? Those relationships and social capital are banked. While The Firm thought those deposits were stored in the Bank of Windsor to be used at the monarch and British government’s discretion, they’re grappling with the realization that the capital is held in the Bank of Harry, newly headquartered in Montecito, California.

In September, when Prince Harry met with his friend of eight years, U.S. First Lady Dr. Jill Biden, and U.S. Secretary of Defense Lloyd Austin to honor the Warrior Games athletes, it wasn’t as Captain General of the British Royal Marines or on behalf of his Commander-in-Chief, the Queen. Now stripped of his honorary appointments, he spoke to the athletes as a peer, a 10-year British Army veteran himself and the founder and patron of the Invictus Games. Harry credits a trip to the 2013 Warrior Games, where he was hosted by Dr. Biden, as his inspiration for the international paralympics-style military competition. A bond sparked by this shared cause and forged over years, as the first lady attended three of the four Invictus Games, remains unshaken.

The President of Angola, João Lourenço, added Prince Harry to his New York schedule last week. They had previously met in September 2019 when Harry visited Angola on a royal tour. Requested and funded by the British Foreign Office, that trip had the overt mission of enticing Angola to join the Commonwealth of Nations. On Friday, they met to mark a significant milestone for an Okavango Delta conservation project. Harry wasn’t there as an emissary of the Queen or the British government, but as president of conservation nonprofit African Parks. The NGO just inked a 20-year agreement with the Angolan government to manage the country’s two largest national parks.

The Sussexes don’t just enjoy this work. They are incredibly good at it and represent a formidable team. Former British Ambassador to Morocco Thomas Reilly called Harry and Meghan “amazing Ambassadors” who are “committed & passionate about vital issues.” He saw the couple win over Moroccans with their warmth and spontaneity just as they charmed Saturday’s Global Citizen Live audience. As concert goer Kendall Belle attested, Harry and Meghan not only drew the loudest cheers of the night, but even more impressive by contrast was the silence as they held the raucous crowd enrapt for a six minute speech on vaccine equity. That’s no small feat.

To be “so eloquent and accessible on a super wonky topic” is a unique skill, Akshaya Kumar, crisis advocacy director at Human Rights Watch noted. World Health Organization Director-General Dr. Tedros Adhanom Ghebreyesus and the health experts the Sussexes convened for a virtual roundtable echoed her praise. The couple will be challenged to prove that they can be more than just attractive spokespeople, but Global Citizen co-founder Simon Moss, insists the pair have been great partners and are “pushing hard.” In May, Global Citizen’s VAX LIVE concert mobilized more than $360 million to fund vaccine sharing programs, and as campaign chairs Harry and Meghan personally helped secure 13 million vaccine doses.

Like the dignitaries and other celebrities who took the stage Saturday, the Royal Family has also found the Sussexes a tough act to follow. That’s why palace insiders and commentators continue to perpetuate the myth that Harry and Meghan left the U.K. because they wanted privacy. The Firm desperately wanted to “get the Sussexes out of the way,” but when aides envisioned sending the pair 5,000 miles away, the environs looked more like Siberia than Santa Barbara. Harry and Meghan “want to do, rather than to be” and have refused to go quietly.

Thus, the collision course with the palace that was preempted first by a pandemic and then parental leave following the birth of their daughter, Lili, has resumed. In actuality, this battle royale to determine the face of modern royalty can be traced back 25 years, to the day a 36 year-old, freshly divorced Princess Diana stepped down from nearly all of her royal patronages to pursue humanitarian work independent from the Royal Family. She may have announced it at a press conference while Harry and Meghan chose Instagram, but the parallels are undeniable.

Following her announcement, Princess Diana began supporting the campaign to ban landmines, calling it a humanitarian issue despite strong criticism, at the time, that she was interfering in government policy. Hearing her son and daughter-in-law champion vaccine access as a human right, knowing Big Pharma and the British government are staunchly against waiving vaccine patents, surely sent chills down the spines of the Royal Family and Prime Minister Boris Johnson’s staff. The Firm has created the thing that they feared most — the second coming of Diana — but this version is a two-headed monster with all of the star power and campaigning zeal but with production deals at Netflix and Spotify to boot.

So to answer biographer Anna Pasternak’s question, “Who are the Sussexes representing apart from themselves?” simply read Archewell’s  “A Letter for 2021.” It opened with a bold declaration, “I am my mother’s son. And I am our son’s mother. Together we bring you Archewell.” As co-founders, Prince Harry and Meghan are no longer serving as fluffers for British trade ministers or the unofficial recruiting and retention team for the Commonwealth of Nations. Now, their priority is fulfilling his mother’s legacy while building one for their own children.
Prince Harry and Meghan arrived in New York with the bravado of DJ from Stomp the Yard announcing, “I ain’t repping nothing, just me.” If last week’s showcase is any indication, they are a force to be reckoned with who will represent themselves extraordinarily well.

R.S. Locke is a multimedia journalist and entrepreneur. Staying positive but petty is a personal creed that underscores her writing and her life. She writes about the world’s longest running reality series and family business – the British Royal Family.