From Abrams to Demings, the ‘angry Black woman’ trope finds its way into election debates 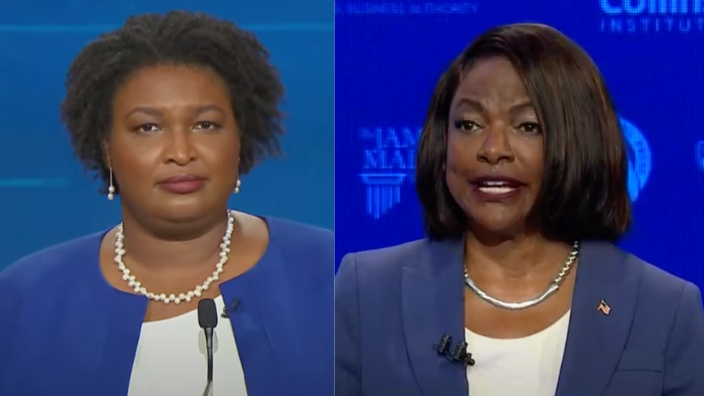 The “angry Black woman” trope is nothing new, but nonetheless, it pisses us, Black women, off each time it’s thrown our way. No matter how accomplished we might be – or how prepared or competent – it always comes back to racial and gender stereotypes and tropes.

In the world of politics, it is magnified 10x more because Black women in the spotlight, whether national or state level, have to mind every word, facial expression, or action – lest we be attacked for not being like our white female counterparts, who are often accepted as more kind, gentle, easier to deal with and more diplomatic.

Monday night in the Georgia gubernatorial debate, Democratic challenger Stacey Abrams was the unsuspecting recipient of what some observers called a racist, sexist trope thrown her way by opponent Gov. Brian Kemp. In the debate, Kemp described Abrams as “upset and mad” during a debate exchange on law enforcement. Every Black woman I know did a full-neck swivel and couldn’t believe that the Georgia governor dared to go there during a televised debate. But go there, he did, and it was very intentionally so, in my opinion. Beyond that, Kemp repeatedly referred to Abrams as “Miss Abrams,” seemingly to underscore her single status, as opposed to his status as a married father. 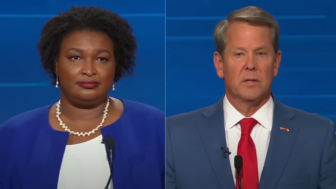 Then on Tuesday night in Florida, U.S. Rep. Val Demings, the Democratic nominee for Senate in the sunshine state, strongly condemned Republican Sen. Marco Rubio during their one and only debate. In one exchange about gun control measures, Demings passionately called out Rubio’s flip-flops and confusing rhetoric on gun reform since the 2018 Parkland school shooting in Florida. However, opinions expressed by viewers on Twitter seemed to express an overall perception that Demings perhaps came on too strong, too hot, and perhaps, a tad “angry.” One headline via NPR, exclaimed, “Demings goes on attack against Rubio in Florida debate.”

Here’s what we know about this year’s 2022 election cycle: racist tropes and language are commonplace. We’ve seen it from Alabama Republican U.S. Senator Tommy Tuberville – who last week implied that Black people are criminals – to Republican candidates for governor and the U.S. Senate, in particular, like Kari Lake of Arizona, Blake Masters of Arizona, J.D. Vance of Ohio, and good ole Herschel Walker of Georgia. This comes at a pivotal time when women’s reproductive rights and progress on civil and voting rights are under assault.

There is irony in the hypocrisy of a candidate like Walker, who is staunchly “pro-life” and yet has allegedly paid at least one woman to have an abortion for him. And yet, Kemp can caricature and stereotype Abrams in unflattering ways with a smirk on his face because he knows what we all know: it works.

We know that such targeted hits against stellar, outstanding Black women in politics are racist and sexist. They’re meant to put us in a box, and, worse, keep us from being taken seriously. We have seen this time and time again. Vice President Kamala Harris has been subject to such tropes. And there have been reports as early as December 2021, in the first year of her term as vice president, that Harris felt marginalized in her role as VP. The reality is this: every Black woman who simply expresses her point of view, stands her ground, is bold, or blazes a new trail – whether in the corporate boardroom, or the halls of Congress and state houses around the country – has been called angry, or strident or too much of this or that. 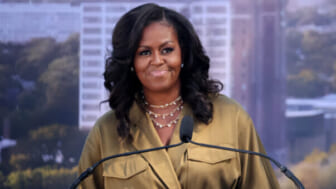 I will never forget how former first lady Michelle Obama was attacked and smeared by white male conservatives like Bill O’Reilly and Cal Thomas back in 2008 during the presidential primaries for saying that for the “first time I am really proud of my country.” At the time, Mrs. Obama offered what to me sounded like hope and praise for America’s progress. In response, she was labeled an angry Black woman. I was one of the millions of Black women who took exception to how she was treated and penned a column in The Washington Post titled, “Black. Female. Accomplished. Attacked.” It went viral because every Black woman who read and shared it had lived the same experience. That was in 2008. This is 2022. And, yet, here we still are.

Here’s the bottom line: The Georgia election race will likely be very close. Just as it was in 2018. Only this time, Georgia is trending more purple and less red, with two sitting U.S. Senators who are Black and Jewish men. Although almost all of the polling data shows Kemp with a lead over Abrams, she can win. But, if she hopes to prevail in her much-anticipated rematch against Kemp, she’ll need Black voters, especially Black men, to vote at record levels yet again. If Monday’s early voting numbers in Georgia are any indication, Abrams could be in luck. Georgia voters hit record numbers on the first day of early voting for the 2022 midterm elections. As we know from the 2020 election, early voting tends to favor Democratic candidates and less so for Republicans.

We will know if Kemp’s cowardly characterizations of Abrams as an “upset and mad” Black female candidate for governor work on independent white women voters and Black men – two groups Abrams will need in order to win the race in just 20 days.

Personally, I hope Abrams wins. Her candidacy is unique to professional Black women of our generation (she is a Gen-Xer like me). She is also single, unmarried and has no children, just like me and millions of others.

Gov. Kemp is very aware that it is a tall order for a single Black woman with no kids to connect with certain voters, particularly white suburban moms. So he throws out key buzzwords meant to scare, alarm, or signal to white voters that Stacey Abrams is not one of us. If Abrams is victorious, however, Georgia will send a powerful message about accepting non-traditional candidates’ ability to lead and govern. She would be the first Black woman ever elected to serve as a governor in the United States and only the third Black person to do so, following Doug Wilder of Virginia and Deval Patrick of Massachusetts.

If successful, Abrams would not only make history but would also show the world that when a Black woman is single, strong and assertive, she isn’t being “angry,” she’s demonstrating she’s qualified and ready to lead.