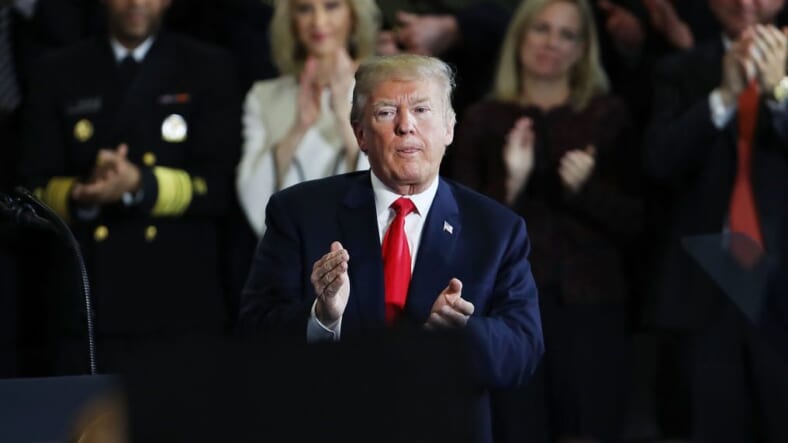 MANCHESTER, NH - MARCH 19: U.S. President Donald Trump arrives to speak to supporters, local politicians and police officers at an event at Manchester Community College on March 19, 2018 in Manchester, New Hampshire. The president addressed the ongoing opioid crisis which has had a devastating impact on cities and counties across the nation. In Manchester overdoses through early March were up 23 percent from this time last year. (Photo by Spencer Platt/Getty Images)

President Donald Trump is gearing up to launch a campaign to scare kids away from drugs, even though the scared-straight tactic hasn’t worked effectively in the past.

Trump is taking a page from Nancy Reagan’s “Just Say No,” anti-drug campaign in the 80s and plans to air attack ads in response to the nationwide opioid crisis, reports BuzzFeed.

“This is something that I’ve been very strongly in favor of, spending a lot of money on great commercials showing how bad it is,” Donald Trump said to an audience in the speech in Manchester, New Hampshire. “It’s the least expensive thing we can do, where you scare them from ending up like the people in the commercials.”

FBI: Bomb explosion at Texas Fedex plant could be linked to Austin attacks

However Lori Dorfman, director of the Berkeley Media Studies Group, told BuzzFeed News, the evidence doesn’t support the idea that scaring kids will turn them away from drugs.

“In general there hasn’t been much evidence for the effectiveness of trying to scare the pants off kids. We have found it more effective to foster a positive environment for kids, rather than wagging our fingers at them.”

Trump campaigned heavily on a promise to deal with America’s devastating opioid crisis, and now, he’s reportedly ready to roll out his controversial new plan. According to Politico, Trump has also repeatedly suggested that using the death penalty is a way to deter drug dealers and traffickers.

Travis Linnemann, an assistant professor of justice studies at Eastern Kentucky University, told BuzzFeed News said the throwback “Just Say No” and “This Is Your Brain on Drugs” 80s ads “not only didn’t work — they hurt.” She called the idea “super tone deaf” to the realities of the drug crisis.

“If this is one of the really important challenges facing our country, why would you be looking to go cheap?”

“Just say no to drugs’ campaigns are not effective unless they are accompanied by a comprehensive approach to youth and wellness,” on the president’s speech. “We must invest in communities so that the lives our youth are living are not lives they want to escape from.”