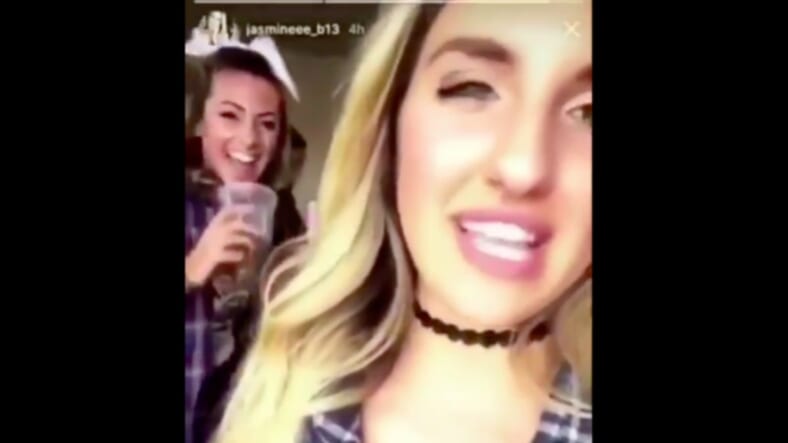 Two white college students – one from Penn State University and the other from William Paterson University – are seen yelling vulgar, racist, hateful obscenities in two separate videos that have now gone viral.

The other student, who is a Delta Phi Epsilon sorority member at William Paterson and has been outed by the school’s newspaper as Jasmine Barkley, asks whether she can use the n-word since many rap songs mention it in their songs.

READ MORE: Black veteran sues Cracker Barrel for racial discrimination after getting kicked out by manager

As always, the University staffs say they are investigating the matter.

William Paterson University released a statement saying in part, “We are disgusted by this behavior which does not reflect our values.”

In a statement from William Paterson University President Kathleen Waldron, says she finds the language that has been used “abhorrent and racist.”

“It is with deep regret that I see any student at our University exhibiting such vulgar and racist behavior. This does not represent our values, our culture, or how we hope students will conduct themselves,” said Waldron.

On the other hand said, Penn State decided not to take a stronger stance against their student. They instead have chosen to stand behind “free speech,” saying that their student’s offensive rant is protected, reports ABC11.

“Penn State’s embrace of diversity & inclusion, and opposition to prejudice & hate, are clear. We condemn racist messages, as they are hateful and violate our institutional values. We cannot, however, impose sanctions for constitutionally protected speech, no matter how offensive,” they said in a statement.

This sentiment is in contrast to the University of Alabama’s response to a white sorority girl’s racist rant earlier this year showing her yelling the N-word on video. The school immediately distanced itself from that student’s actions and her sorority released her from membership.

Barkley has provided a back-handed apology through an open letter in the WPU student newspaper. In it she says,

I never attacked a specific person or group. I was simply questioning why one race has more rights to freedom of speech than another,” citing the multiple times she has heard the word used in rap music and by celebrities like Charlamagne The God.

“Penn State’s decision to let the offenders’ behavior go unaddressed while hiding behind the principle of ‘free speech’ is disheartening, inappropriate and unacceptable,” said the Penn State College Democrats through a statement. “The idea that this principle implies an absence of consequences is indefensible and untrue.”

Delta Phi Epsilon’s international office, says it does not tolerate racism and the woman in the video is no longer a member.

The organization tweeted this statement: “Our organization was founded by 5 Jewish women who were discriminated against. They stood up for social justice and we continue to stand for that today. We will be forming a task force on diversity and inclusion as a result of this incident.”

Students on campus have condemned the racist videos.

Her name is Jasmine Barkley. This is my university. Penn State. Beyond ridiculous. @penn_state y’all already know the deal. Just do your thing. pic.twitter.com/ItUzHV38aE

@penn_state For us to feel accepted and a part of this community, individuals who come to campus and proceed to act as such must be held accountable. Her name is Jasmin Barkley from William Patterson University. Take action!! pic.twitter.com/4KA7OASFUr

“I think to put it out there on social media is unprofessional,” said William Paterson University senior Theo Sicurella.