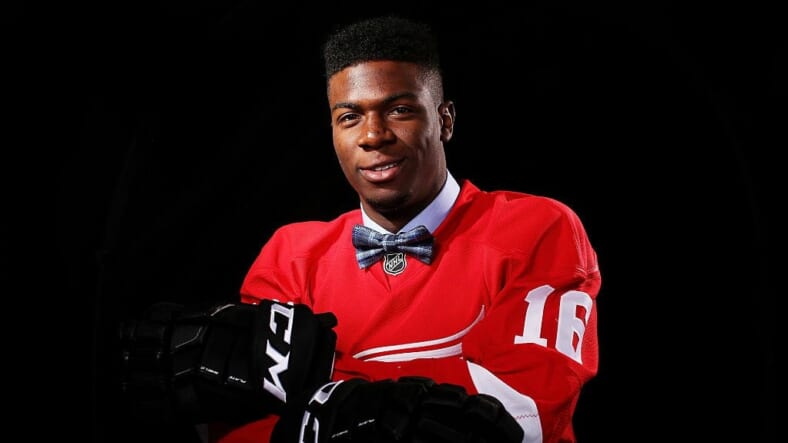 Givani Smith poses for a portrait after being selected 46th overall by the Detroit Red Wings during the 2016 NHL Draft on June 25, 2016 in Buffalo, New York. (Photo by Jeffrey T. Barnes/Getty Images)

The National Hockey League doesn’t have a lot of Black players and now one of the few men who hold that distinction has been made a target.

Detroit Red Wings prospect Givani Smith has been dealing with racist taunts since the beginning of this season, and now Smith needs a police escort due to the alarming vitriol he’s been subjected to at games.

With nearly 700 players in the NHL, only approximately 30 of them are Black people.

READ MORE: This Is America: 5 powerful messages that will stay with you long after your Donald Glover hangover

“It’s heartbreaking to be honest. He shouldn’t have to endure it,” said Red Wings general manager Mike McKenzie told The Record. “[Smith] did a good job of turning the other way. I think the unfortunate part — and it pains me to say this — is that he’s probably used to it by now. He’s probably heard things before, which is brutal.”

Last week, Smith, 20 was suspended from an Ontario Hockey League playoff game “for giving the middle finger to the opposing bench, but before and after that incident he was subjected to racial slurs and threats, according to his team,” ESPN reported.

Considering how hockey is notorious for its blood thirsty violence, with players often getting into brawls that lead to bloody noses, Smith’s suspension just for flipping off an opposing player is incredibly suspect and hints that the racism he is facing may not just be coming from spectators in the stands.

That offensive middle finger is now also being used as an excuse for the treatment he has received.

“[It] sparked a series of racially charged comments on social media,” the Waterloo Region Record reporter Josh Brown claims. “One troglodyte reportedly sent a photo to Smith’s personal Facebook account with the caption reading ‘Hockey N***er and another sent a death threat.”

New York Rangers general manager Mike McKenzie said, “It’s heartbreaking to be honest. He shouldn’t have to endure it. He did a good job of turning the other way. I think the unfortunate part — and it pains me to say this — is that he’s probably used to it by now. He’s probably heard things before, which is brutal.”

In response to these ongoing threats Smith needed a police escort from the airport and watched Monday’s NFL Playoff Game 7 from the press box with a security guard outside of his door.