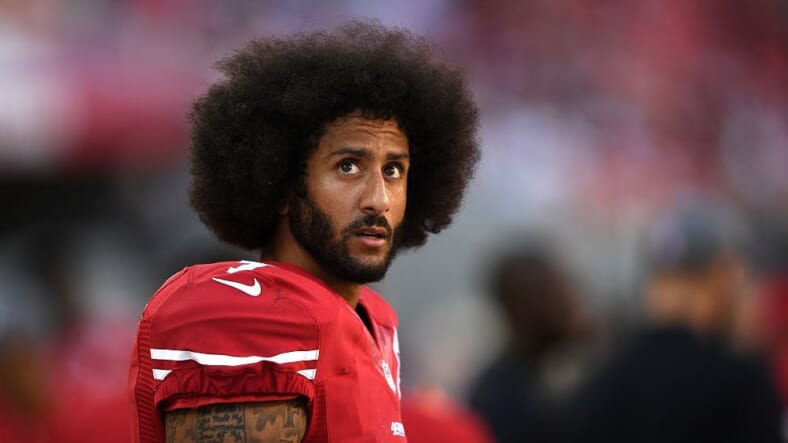 On Monday, Nike drew a very clear line in the sand by choosing Colin Kaepernick to be the first face celebrating the 30 year anniversary of their ‘Just Do It” campaign.

In the first bold statement the ad reads: “Believe in something, even if it means sacrificing everything #JustDoIt.”

Believe in something, even if it means sacrificing everything. #JustDoIt

The former quarterback for the San Francisco 49ers, revealed the collaboration in a tweet that was subsequently retweeted by Nike’s corporate Twitter account. But soon after the unveiling, while the rest of us were cheering and reposting the visual with hashtags like #ImWithKap, conservatives, MAGA red cap wearers and Trump supporters all over the nation effectively lost their ish.

These folks were BIG MAD y’all.

So much so, that Bobs and Susans from near and far found themselves running to their cupboards to grab a pair of scissors, just so they could cut the Nike symbols off their clothes, shoes and other high priced sports gear.

Some of these mental giants even reportedly set their shoes on fire while they were still wearing them, causing them to rush to the emergency room cause…. ‘Merica!

In addition to missing the irony of their decision to boycott Nike as a response to Kaepernick exercising the exact same right to boycott the NFL, these people have somehow also missed the point that it doesn’t make sense to destroy items they already paid for.

NIKE’S ALREADY GOT YOUR MONEY, IDIOTS.

They don’t care if you burn their products or throw them into the ocean, they already got their coins from you. *insert weary sigh*

.@Nike Due to your support of C.K. in your coming adds, I as an American can no longer support your company. #boycottNike #IStandForOurFlag pic.twitter.com/5JxSMD8SSO

Despite the sheer dimwittedness of this “protest”, According to The Wall Street Journal, this initial flood of white tears did cause a dip in Nike’s stock though.

“[This] move that joins one of the NFL’s biggest business partners with a controversial star who is engaged in a high-profile legal battle with the league,” writes the publication.

“The news sparked some criticism on social media and weighed on shares of Nike. The stock fell 2.9% Tuesday to $79.78 and was the worst-performing member of the Dow Jones Industrial Average. For the year, shares remain 28% higher.”

But never fear, if you thought these temper tantrums would make the brand back off their allegiance with Kap, that couldn’t be further from the truth.

“This campaign is a compilation of the most inspirational athletes around sport—athletes who have chased crazy dreams, no matter the obstacle or outcome,” a Nike spokesperson explained in a statement.

So it appears all those burned sneakers, cut up socks, and trips to the emergency roon were in vain.

Die hard fans may remember that Kaepernick was signed with Nike back in the day when he was an up-and-coming star with the 49ers, who he once led to back-to-back playoff appearances, including a Super Bowl appearance. But following injuries and his absence from the league last season, that relationship was put on hiatus as he solidified his title of being the most polarizing figure in the NFL.

But now, the sports brand wants that old thang back and has decided to not only sign Kap to new, multiyear deal but also make him the most prominent face.

“Nike’s team recognized that, even with links to the league, that they wanted to be socially conscious and authentic in the spirit of what ‘Just Do It’ meant,” the spokesperson said. “Colin was the ideal fit and nobody represents that quite like Mr. Kaepernick.”

In plain English that means, somebody at Nike looked around the board room and said, “We need to be on the right side of history here guys!” And the powers-that-be agreed that it was probably best not to risk Ava DuVernay depicting them as cowards 20 years from now when she directs Kaepernick’s biopic.

But before we give this corporation too much applause for being brave and “woke” we also need to recognize that their renewed relationship with the former NFL player is more mutually beneficial than some may realize.

In recent months, the brand began to buckle under the weight of fallout that ensued after an internal scandal caused nearly a dozen executives to leave the company amid complaints of inappropriate workplace behavior. Just last month, two former employees filed a lawsuit alleging gender discrimination and detailing specific accounts of harassment.

While Nike has said it “opposes discrimination of any type and has a longstanding commitment to diversity and inclusion,” — aligning themselves with Kaepernick is undoubtedly their way of showing they’re willing to put their money where their mouth is.

So is this a case of a corporation selflessly risking it all in the name of social justice?

But that still doesn’t make it any less dope, timely and necessary though. #WellPlayedNike