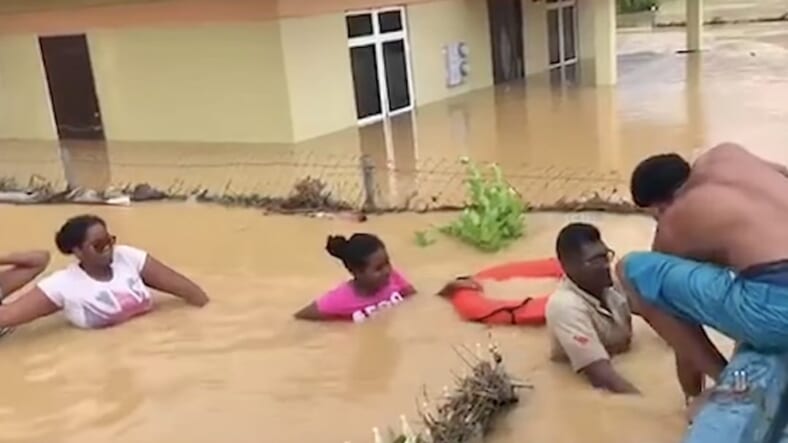 Proud Trinidadian Nicki Minaj wants to step up to help those in her homeland, after it was reported that upwards of 120,000 Trindad and Tobago residents have been af­fect­ed by flood­ing over the week­end.

“Some parts in Trinidad are ok but a large number of areas look like this and worse and people have lost everything they possess,” Minaj, who was born in Saint James, reposted from soca artist Bunji Garlin on her Instagram page alongside a photo of a home with flood water almost reaching the top of its doorway.

“There are a lot of people from abroad asking about assisting but they haven’t seen any info on how to do so, so we will gather what info we can and put it in a next post,” the rapper posted to her fans. “Thanks for all the prayers and we journey through this time.”

Minaj posted a video on her Twitter page of Trinis trying to negotiate muddy, flooded waters around their home.

Trinidad ?? ? broken hearted to see this. Hope I can help. ♥️ pic.twitter.com/vmD6FD3Ign

According to Port of Spain-based Newsday, after two days of torrential downpour parts of of the country were only accessible through dinghies, with some housing developments submerged in at least five feet of water.

“It is a national disaster,” Prime Minister Keith Rowley admitted to media outlets. “It is quite widespread and severe, and it will take a lot of money to fix.”

“In the Greenvale area virtually every house have been affected. One of my household staff this morning lost everything, and her family is at a shelter.”

There’s been no word yet on what exactly Minaj plans to do to provide aid, but officials have made it clear that any assistance they can get would be appreciated.

Monday, Na­tion­al Se­cu­ri­ty and Com­mu­ni­ca­tions Min­is­ter Stu­art Young, held a press con­ference stating that Gov­ern­ment-led clean-up missions had already be­gun in most com­mu­ni­ties with mem­bers of the pro­tec­tive ser­vices per­form­ing res­cue op­er­a­tions to aid the over 500 families affected.

“Some of the out­skirts are still af­fect­ed but most are not,” Young said.

Several people were stranded on the roofs of their homes, where they’d fled to escape the rising waters. But even in the midst of nature’s wrath, community members have been hailed as heroes for stepping up to help each other while awaiting the arrival of rescue workers.

Prays goes out to flood victims of Trinidad ???? pic.twitter.com/XwLB6HjKO1

Those who have made it out have also joined forces to provide food, clothing and in some cases, even shelter to those who have been displaced. Schools and community centers have also be repurposed as safe havens for those seeking to get out of the storm’s path, although one designated safe space in Sangre Grande, in Trinidad’s northeast, had to be abandoned after it become flooded.

In ar­eas where flood waters had re­ced­ed, Young said staff and equip­ment from re­gion­al cor­po­ra­tions, the Wa­ter and Sew­er­age Au­thor­i­ty (WASA) and Cepep were de­ployed to aid cit­i­zens with clean-up efforts.

Despite the extent of the devastation, there have been no confirmed reports of any fatalities.

“Right now we are concentrating on those who have been flooded and to ensure that those taken to shelters have adequate cots, blankets and food supplies,” assured Rowley.

READ MORE: Van Jones questions Jared Kushner about his ‘very small resume’ but Twitter questions him about his interview skills

#Repost @bunjigarlin ・・・ Some parts in Trinidad are ok but a large number of areas look like this and worse and people have lost everything they possess. People are now out in droves giving all the assistance they can to who needs it. In the disaster the blessing of togetherness stands so strong in this moment here in Trinidad and Tobago everyone is lending a hand even those who have nothing left. In accordance to the Office of Disaster and Preparedness Trinidad and Tobago is NOT under any Tropical storm or Hurricane watch, this is just a very weird weather system over T&T and the destruction you saw in pics and videos is from 3 days steady rain. The office reports that the orange weather alert stands until Tuesday 23rd Oct 2018 so we have to continue to brace as we seek to rebuild. There are a lot of people from abroad asking about assisting but they haven’t seen any info on how to do so, so we will gather what info we can and put it in a next post. Thanks for all the prayers and we journey through this time.