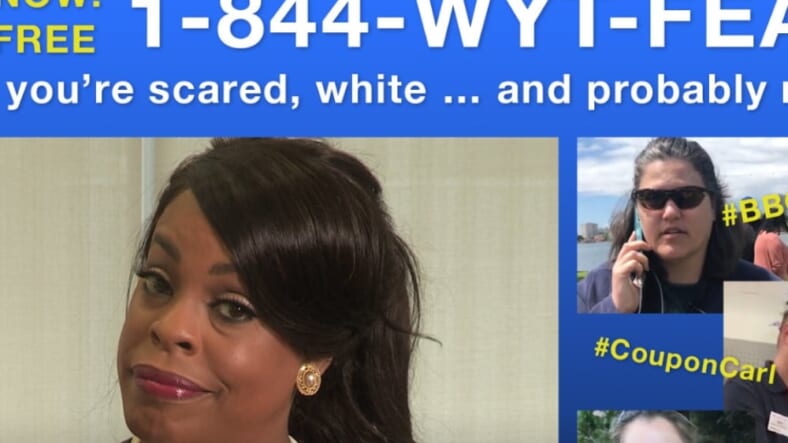 The New York Times teamed up with actress Niecy Nash to troll scared white people who have an affection for calling 911 on regular Black folks, with a satire video promoting an “emergency hotline.”

With a real number 1-844-WYT-FEAR, customer support directs them to basically sit their basic butts down and stop the uncalled-for calling of police.

—University names college for Gwen Ifill, but causes discord in its choice of dean—

It’s the video we’ve all been waiting for and gives the necessary commentary directly to the BBQ Beckys’ and Permit Pattys’ of the world with directions of what to do if anxious feelings well-up inside with fear when a Black person does pretty much nothing, but they want to invoke their white privilege anyway.

Comedic actress Niecy Nash, hosts the video and gives a pitch for several infamous scenarios that we’ve all become familiar with, but now with the “new and radical product” they should instead give the number a call as their first line of defense when they’re so-called fearful.

“You’re scared. You’re white. But with cell phone, cameras, and social media, calling 911 on your Black or brown neighbors just isn’t what it used to be,” Nash, playing narrator, says to potential white customers.

And if you call the number, it actually takes things a step further and gives afraid white folks options to perhaps go meet their neighbor or to do the ultimate – hang up the phone and mind their own damn business.

Although the video is all jokes, Black folks have been the butt of something that has not been a laughing matter.

Here are just a few examples of stories we’ve covered: