OPINION: Kevin Hart’s instant Oscar mishap is a warning on why homophobia and hate will get you no where 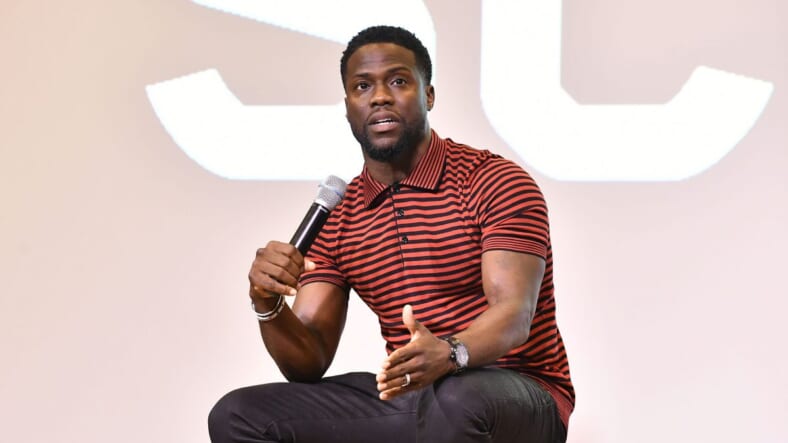 This month, on another episode of “How Your Mouth Can Cost You Your Job,” box office superstar Kevin Hart just threw away the biggest moment of his career simply because he didn’t want to apologize for displaying hate.

After making previous homophobic tweets and jokes that re-surfaced following his announcement as the host of next year’s Academy Awards, Hart simply gaslit those who raised concerns. Hart said the Academy of Motion Picture Arts & Sciences (those responsible for putting on the Oscars) gave him an ultimatum in asking him to apologize or they would replace him. Instead of simply making amends, Hart chose to step down, adding that he was not “feeding the internet trolls.”

READ MORE: ‘Hate it or Love it!’: B Smith’s husband quotes 50 Cent while posting pictures of his alleged new girlfriend

“The reason why I passed is because I’ve addressed this several times,” Hart said on Instagram following his departure from the Oscars. “I’m not going to continue to go back and tap into the days of old when I’ve moved on and I’m in a completely different space in my life.”

I know who I am & so do the people closest to me. #LiveLoveLaugh

Note, this is how a coward backs down from accountability.

Kevin, I’m not an internet troll, but a Black gay man who has first-hand experience of what such hate can do. Words have power and as a comedian, you should know this already. The fact that you would choose to turn down an opportunity rather than clarify your behavior shows that there’s something deeper here. Why is it so hard for you to simply apologize again and explain to fans and the public where you stand?

For those who are on the fence about this, ask yourself these three questions:

2. Do you think it’s okay for a man like Kevin Hart to have a platform in an industry that has a huge LGBTQ+ following to not hold him accountable for such hateful remarks?

3. If Kevin Hart was a white person who has said the n-word in the past, would you be so quick to just move along and not address it?

Hate is hate, whether it’s homophobia, ageism, sexism or racism — attacking any community based on their identity is unnecessary and hurtful. In a world where all marginalized people are under constant scrutiny and discrimination, what we don’t need are those who make concessions for who should and should not be protected. I have no sympathy for men like Hart who refuse to clarify and reiterate their shortcomings to those they have afflicted. As a result, I’ve lost a great amount of respect for him altogether.

The same can be said for Meek Mill, who released his new album “Championships” last week. By allowing the ever-so-problematic rapper Rick Ross to drop a homophobic slur in his featured verse on the album, it revealed a hypocrisy that I just cannot rock with. Since being released from prison, Meek has made a point to be the hip-hop face for social justice and prison reform, speaking to a larger audience about racial disparities and change. The fact that he tolerates homophobia from others in his own music, shows a complete disconnect and a sign of “partial care” that does not extend beyond race.

The irony is that being homophobic is a form of anti-Blackness because Black people, like myself, are a part of that community. While many are quick to say how they are against racism, they cannot seem to understand how the same emotion of hatred towards LGBTQ+ people who are also people of color doubles down on the marginalization.

I know who I am & so do the people closest to me. #LiveLoveLaugh https://t.co/HlvWFMkdST

The passive aggressiveness of Hart’s hashtag “#livelovelaugh” following his non-apology on Instagram for his homophobia speaks volumes. Who can live, love, and laugh at…”Yo if my son comes home & try’s 2 play with my daughters doll house I’m going 2 break it over his head & say n my voice ‘stop that’s gay’.”

Growing up, I’ve witnessed enough young, Black gay people experience trauma because of attitudes like this. It’s sad to see a comedian who gives the impression that he’s caring and kind, show such a lack of empathy and then defensiveness for something that he claims to be a part of his past. Which should stand as a lesson to all that being homophobic in 2018 will cost you because progressive and inclusive spaces ain’t got time for that.

Kevin Hart, this is the Academy Awards, not the Republican National Convention — know your audience. You cannot expect to occupy spaces with diverse people, get paid huge dollars from them all the while holding beliefs that harm their existence. It’s ignorance like this that further divides marginalized groups from intersecting and strengthening their fight.

In this instance, Hart allowed for hate to overshadow his talents and he missed a glowing opportunity. The community could have had another Black comedian and another Black face in Hollywood use this platform to address #OscarsSoWhite and shine a megawatt spotlight on other issues that plague our community in front of millions around the world. Instead, the Oscars will likely play it safe and give us someone who will just try to be funny and keep the show moving. It’s a missed opportunity in so many ways, but ultimately a reminder to us that hate will never win.

Ernest Owens is the Editor of Philadelphia magazine’s G Philly and CEO of Ernest Media Empire, LLC. The award-winning journalist has written for USA Today, NBC News, BET, HuffPost and several other major publications. Follow him on Facebook, Twitter, or Instagram and ernestowens.com.