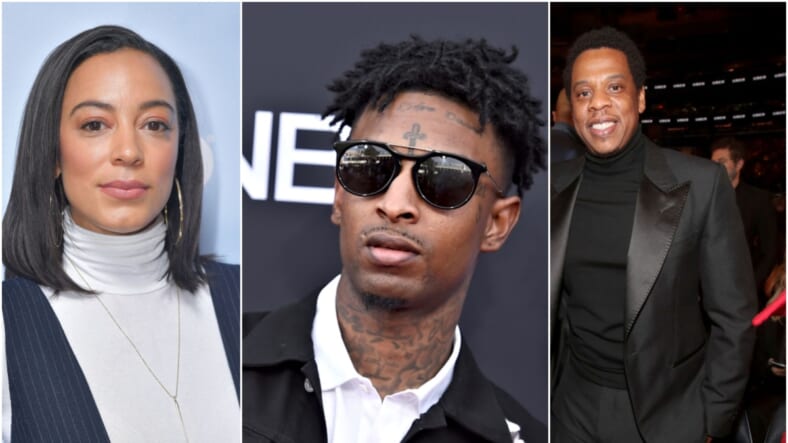 Angela Rye doesn’t believe immigration is only a “brown” issue and is defending her assertion that “Black folks are immigrants too.”

During a Jan. 11 interview with morning radio show “The Breakfast Club,” the attorney who also appears regularly as a commentator on CNN argued that immigration laws affect communities of all races not just Latinos. She also expressed frustration about what she believes is becoming a “wedge issue” for communities of color.

“I’m struggling to understand why Black folks don’t understand that we’re immigrants too,” she explained to the radio show co-hosts. “There’s been a big myth that this is just a brown issue, and it’s not — it’s Black and brown. And Asian and white.”

Her statements sparked the ire of many fans who accused her of implying African-Americans came to the U.S. willingly as immigrants.

“Yo I’m tryna figure out when the hell did black people become immigrants????! That statement is extremely problematic!!!” wrote one critic on YouTube.

“Immigrant vs enslaved. Bit of a difference there and not sure why we continue blurring those lines,” a Twitter user opined. “My ancestors were slaves – not immigrants. We are not a nation of immigrants, however politically convenient that argument might be …”

But after Grammy-nominated rap star 21 Savage was arrested by Immigration and Customs Enforcement (ICE) officials during Super Bowl weekend, Rye circled back to her original point, stating his case proved her point.

“Maybe now ya’ll will believe me when I say Black folks are immigrants too (not all, but SOME),” she tweeted in response to an article about his arrest. “Here’s Exhibit A and it’s ridiculous. We cannot afford to fight issues of injustice in boxes.”

While she still got some pushback from some followers, others thanked her for speaking up for Black immigrants.

“My father came here from Jamaica as did a lot of my family and friends,” posted one fan. “Not seeing immigration as an issue for Black folks too, is really a Southern Black folk (not from Florida) position. Nobody Black living in NYC or in the State of Florida would be oblivious to it.”

Check out her response below.

Maybe now y’all will believe me when I say Black folks are immigrants too (not ALL, some). Here’s exhibit A and this is ridiculous. We can not afford to fight issues of injustice in BOXES. https://t.co/v430Pe64ZO

Update on the Case

Angela Rye isn’t the only one talking about 21 Savage’s arrest and possible deportation. According to UPROXX, Jay-Z has asked his attorney, Alex Spiro to get 21 Savage out of ICE custody and “reunited with his children immediately.”

In an interview with TMZ, Spiro stated, “We are not going to stop until he is released, bonded out or in front of a judge […] What we have here is someone who overstayed their Visa with an application pending for 4 years — not a convicted criminal that needs to be detained and removed but, by all accounts a wonderful person, father, and entertainer who has a marijuana offense which was vacated and sealed.”