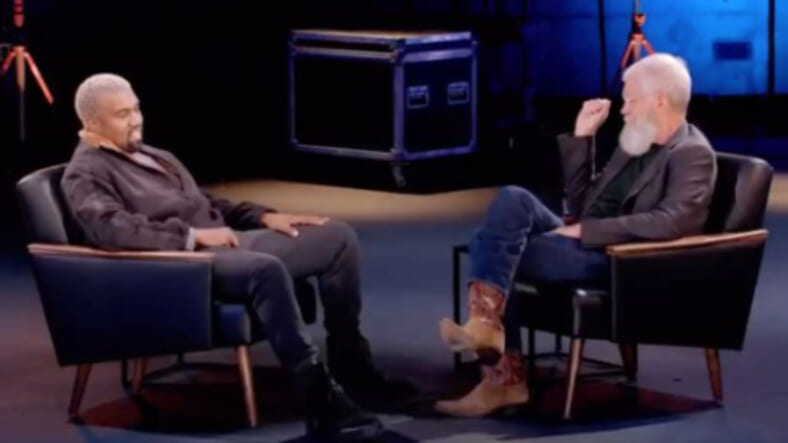 Kanye sits down with David Letterman to talk Trump. (Netflix)

A clip of Kanye West’s sit down interview with David Letterman for the Netflix talk show My Next Guest Needs No Introduction lends more insight into how oblivious the rapper actually is about politics.

West, who boasts that he is an ally to President Trump and proudly wears a MAGA hat in support, opened up to the famed talk show host about his unpopular political stance and his mental health in a wide-ranging interview.

And when Letterman asked West if he had voted for Trump, Ye admitted that he has never actually voted in his life.

Letterman shot back telling West he doesn’t actually “have a say in this.”

“This is like my thing with Trump—we don’t have to feel the same way, but we have the right to feel what we feel,” West says in the new interview, according to The Daily Beast.

West then defended his decision to wear a MAGA hat, calling it an effort to “break the stigma” that comes with supporting a polarizing President.

West siding with Trump supporters saying they are “bullied” for their views, which often aligns with those of Neo-Nazis and other hate groups.

—Father of suspect in Maleah Davis’ case blames mom; says he cared for the girl—

West also talks about his mental health issues, his momma and his wife Kim Kardashian. He adds: “When you’re bipolar, you have a potential to ramp up, and it could take it to a point where you start acting erratic, as TMZ would put it.”

West admits he hasn’t taken his meds for at least a year.