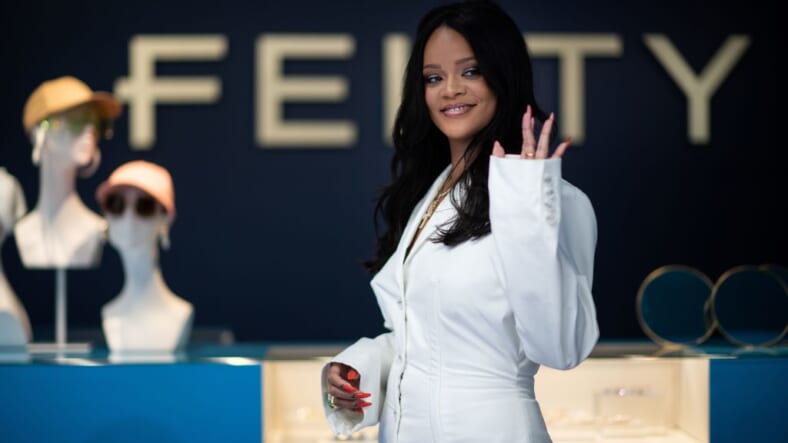 Rihanna poses during a promotionnal event of her brand Fenty in Paris on May 22, 2019. (Photo by Martin BUREAU / AFP) (Photo credit should read MARTIN BUREAU/AFP/Getty Images)

If there’s one thing Rihanna knows all about it’s winning! So it only makes sense that she was on hand this weekend the House of Miyake-Mugler’s Porcelain Ball to present a whopping $10,000 prize.

According to Snobette, Saturday, Riri wowed a crowd of fans and ballroom enthusiasts as she made a grand appearance at PlayStation Theater in Midtown Manhattan.

READ MORE: Rihanna is not Jamaican but Twitter has decided to convince us otherwise

“When people think about the ballroom community, thoughts generally turn to voguing, which is known in the scene as a part of the performance category,” explains OUT Magazine. “Behind that sits the categories of realness, a type of identity performance, and runway, which is exactly what it sounds like. But though it may not get the most mainstream attention, the category of face is one of the hottest there is inside the community.”

“Face is the combination of 5 elements: Eyes, nose, skin, teeth, and structure,” Legendary Exotic Miyake-Mugler, overall mother of the House of Miyake-Mugler recently told the publication. “ These elements come together to form a unique beauty that is rarely seen. Think of the judges as a modeling agency: they are looking for their star model of the night.”

The Barbadian singer was all smiles in her white ensemble under the bright lights of the photographers waiting for her arrival and attended the event with bestie Melissa Forde. In addition to Riri and the runway performers Lil Mama and model Winnie Harlow also made appearances.

Since then social media has been all abuzz with clips and photos from her action packed weekend in NYC. Check out some of our faves below.

Rihanna walking down the runway at the Porcelain Ball just before she starts judging for OTA Face which was sponsored by her company Fenty Beauty with a $10,000 Grand Prize!🔥🌈 pic.twitter.com/efm37xLlxI

WHEN RIHANNA REMEMBERED ME😱
I Gagged!!! So let me start of by saying i had an amazing time !! At the Mugler ball ❤️ And i had a very good time .. and last night i got to serve my face!!!! to THE QUEEN of the night @rihanna 😱😍 and she Lived for me and gave me my 10sss!!!!!! pic.twitter.com/ypsan4WdLi