Kanye West compares his support of Trump to racial profiling

"I'm a Black guy with a red [MAGA] hat, can you imagine? ... It reminded me of how I felt as a Black guy before I was famous, when I would walk in a restaurant and people would look at you like you were going to steal something," he said.

While people on a global scale have given both President Donald Trump and his administration the side-eye for his mishandling of the coronavirus pandemic, rapper Kanye West wants us all to know that he’s still got the president’s back.

During the latest cover story for Wall Street Journal Magazine, the father of four explained why he’s doubled down on his stance despite how polarizing it’s made him in the court of public opinion.

Writer Christina Binkley pointed out that West isn’t even registered to vote and “doesn’t follow politics.” None of that seemed to dissuade him for standing firm in is backing of Trump. 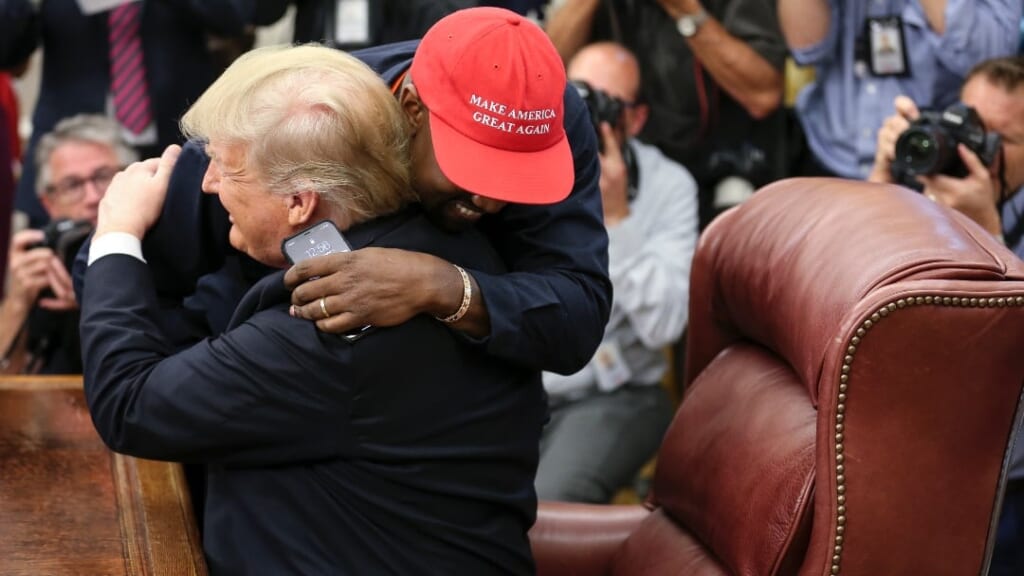 Rapper Kanye West hugs U.S. President Donald Trump during a meeting in the Oval office of the White House on October 11, 2018 in Washington, DC. (Photo by Oliver Contreras – Pool/Getty Images)

He admitted to the publication that he did not vote for Trump in the 2016 presidential election because he didn’t vote at all. West added that if he had been a registered voter at the time, the real estate mogul would have received his support.

In the interview, the 42-year-old also touched on his friend and collaborator ASAP Rocky‘s legal woes in Sweden.

“Just spoke to @KanyeWest about his friend A$AP Rocky’s incarceration,” Trump tweeted at the time following discussions with the entertainer. “I will be calling the very talented Prime Minister of Sweden to see what we can do about helping A$AP Rocky.”

“I’m Kanye West,” says the rapper-provocateur. “The word ‘ambitious’ is beneath my abilities.” As #KanyeWest leans into a rebooted life of fashion design and gospel music, we explored his new cast of characters, his thwarted dreams, his acknowledged stumbles and his bigger-than-ever plans. Read our digital cover story at the link in bio. (🖋️: @christinabinkley, 📷: @paolopellegrin)