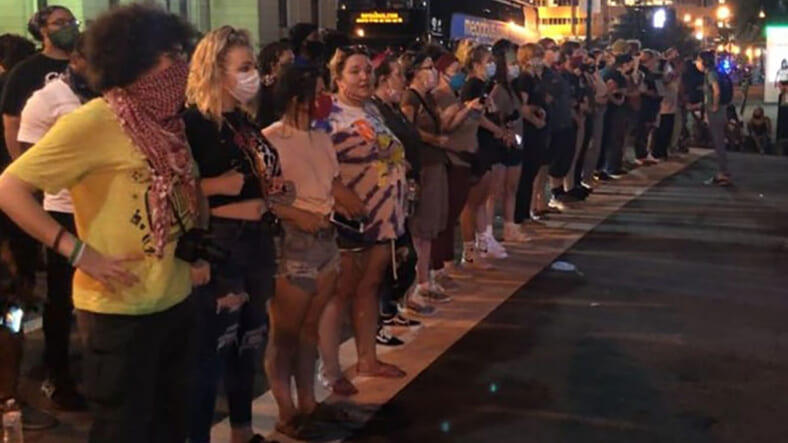 Injustice and discrimination tend to be described in binary terms: good vs. evil, female vs. male, Black vs. White.

However, at one of the at least twenty anti-police violence demonstrations held across the country on Thursday, an act of alliance disrupted that line of thinking by showing White bodies on the line to protect Black lives.

READ MORE: A word for the Karens and Amy Coopers of America

In an image captured by photographer Tim Druck, scores of White women in Lousiville lined up arm-in-arm to form a human shield separating the Louisville Metro Police from protestors expressing their angst about the murder of Breonna Taylor, and countless other Black people at the hands of the police).

Taylor was fatally shot by police as they barged in her home in March with a no-knock warrant and killed her while she was laying in her bed. The police were wrong about not only the suspect but also the apartment that they entered.

Using their bodies as sacrificial lambs, they offered up their White privilege for the safety of Black men, women, and children.

The photo went viral as it dismisses a divisive narrative that people of different races can’t get along. More poignantly, that white women like Amy Cooper, have no respect for Blackness if it does not serve them.

One organization, the Kentucky National Organization for Women, had over 100,000 shares from their Facebook profile.

“This is a line of white people forming a barrier between Black protesters and the police. This is love. This is what you do with your privilege,” the post states.

READ MORE: 911 call from Breonna Taylor shooting: ‘Somebody kicked in the door and shot my girlfriend’

Druck told the Courier Journal that Chanelle Helm, who is the lead organizer for Black Lives Matter Louisville, used a bullhorn and said, “If you are going to be here, you should defend this space.” After the command, they instructed those present to form the line facing police at 6th and Jefferson streets.

“She was asking for white folks to use their privilege, and put their bodies between police and the other demonstrators,” Druck said. “And people responded. They didn’t, they didn’t need to be convinced. Everybody willingly and enthusiastically did it.”