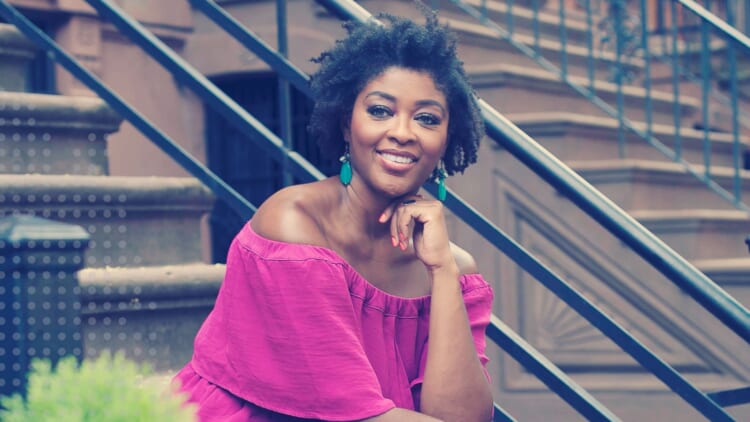 Culture critic and author of “Dressed in Dreams,” Tanisha C. Ford, has inked a deal with Sony Pictures Television, in collaboration with Gabrielle Union‘s and Freida Pinto’s production companies.

The TV production will be a part of Union’s first-look deal at Sony Pictures TV, via her company I’ll Have Another in partnership with Pinto’s Freebird Films Entertainment.

“Dressed in Dreams” was released in 2019 by St. Martin’s Press. The book landed on numerous notable lists and received plenty of praise from readers who enjoy both the nonfiction and feminist genres of literature.

The “Dressed in Dreams” TV production will follow the fictionalized Tanisha as she goes through different life experiences, using clothing of the 80s and 90s as a guide.

“To go on this journey with Gabrielle Union and Frieda Pinto is amazing,” Ford told The Grio. “They are both visionaries and storytellers, plus they both get the vision that I have for the book. I’m just excited to merge our visions and introduce something to the world that I think can really give a fresh take on the Black experience in this country dealing with race and gender, sexuality, politics, and especially on the power of being Black, and the beauty in it.”

The reality is, Black-centered stories are still minuscule in comparison to other stories and acknowledging the challenges Black women still face in publishing, TV and film is important. Ford says her vision aligns with Union’s and Pintos’ goal to bring about social change in TV and film.

“I knew from my first conversation with Gabrielle and Freida that they got [that],” she said. “Their companies, too, are committed to telling the stories of people whose voices have been on the margins for far too long. They’re using their resources to bring those voices into the center of the conversation in a way that I was attempting to do in print.”

Ford’s memoir takes readers through eras of Black fashion like the 60s with Afros and dashikis, to the 70s go-go scene, to 80s hip hop’s baggy jeans and bamboo earrings.

She even highlights how Black fashion inspires social justice with the #BlackLivesMatter-inspired gear of today. These symbolic pieces of fashion also speak to her own life as a Black girl growing up in the Midwest.

“I was raised by a Black woman who was a self-proclaimed Black feminist and Black nationalist,” Ford shared. “She wore her hair in natural styles … she was unapologetically Black before [it] became a “thing” … so I grew up looking to her as a role model.

I saw how much pride she took in her clothes and the things she picked out for herself, and some of those things she even designed for herself. My mother started sewing when she was a young teenager. In many ways, this book is an ode to my mother and the relationship we shared through clothing.”

As Black fashion continues to evolve, it continues to be replicated by the masses. From non-Black social influencers (you know who) to high-fashion vultures preying on Black streetwear designers’ ideas, Ford’s book takes on Black culture appropriation and how it continues to echo issues in social justice.

“When I wrote this book, I was so tired of seeing white women wearing everything from cornrows to our baggy clothes, to gold fronts, and getting all the credit for popularizing those things as if Black women hadn’t been doing that forever,” Ford said. “I wanted to write ‘Dressed in Dreams’ as a love letter to us as a way to trace our fashion history and show why these fashion styles emerged within our community, what they represent to our community, and what they represent for different generations over time.”

“I wanted to map a genealogy of Black fashion and situate women who look like me at the center of that history so that we no longer had to yell out to the masses, ‘We’ve been robbed, we been wearing those things before any Kardashian!” I really wanted to say ‘Here, Black girls … I love you, I love us and I love what we created. I’m just honored that I had the privilege to do that in print, and now I will have the opportunity to do that in visual form.”

“Dressed in Dreams” details how the Black struggle against social injustice was reflected in the fashion styles, colors, and adornments that Black women wore from headwraps showcasing a sense of self, to fur coats that asserted their right to luxury.

“Black women and men in the Black Panther Party wore their berets and black leather jackets as a very visual statement of their radical grassroots community-based politics, and even young people my age of the hip-hop generation sported our hoodies as a way to say our street style matters too. We’ve seen the hoodie be adopted by the Black Lives Matter Movement as a testament to our collective power and culture, but also as a statement to say to the police to stop killing us.

“I love having the vision as a historian to be able to pull all of those different fashion moments together to one tight narrative to show the resilience of Black people but also the fact that our bodies are constantly on the front line of the movement for Black freedom and change.”

Ford plans to keep the origins of her memoir as congruent as possible to the acquired TV development of it.

“I know that it will stay true to the book in a sense that the Black girl spirit of the book will remain,” Ford said. “The rich and layered storytelling will remain. But what I’m excited about is the possibility to engage other black women creatives like bloggers, fashion writers, Black costume designers, and people from the queer community who are also writing about fashion and innovating with fashion to be apart of this so that it’s not just my story, that it becomes our story.”

Ford said she’s grateful to the Black women who have come before her to blaze a trail for her to follow – women like author/trans activist and producer Janet Mock and author Brittney Cooper, whose book “Eloquent Rage” would also make for an amazing television show.

“Those people were guiding lights for me through the writing process and through this new part of the process,” she expressed. “I want to shout out people like Janet Mock … I can tell you that not a day passes that I don’t think “I wanna be Janet Mock when I grow up (laughs). I went from teaching her first book ‘Redefining Realness’ in class and just marveling at how beautifully and powerfully she was able to tell her story.

I then followed her as a fashion journalist and a pop culture expert and seeing everything that she was able to do behind the camera with “Pose” and now her new series “Hollywood” on Netflix. She is truly an inspiration.”

Creatives like showrunner Issa Rae and others have helped foster opportunities that allow other Black women to tell their stories from their own unique perspectives. Ford hopes to continue that movement.

“While there aren’t enough of us in these positions, I want to fight for more of us to be able to tell our stories on our own terms,” she said. “I am blessed by the people who have come before me. Both Gabrielle and Freida’s production partners have been really good about being transparent, and demystifying the Hollywood end of all this for me.”