Coddle the convicted felon and tackle the kid, eh? 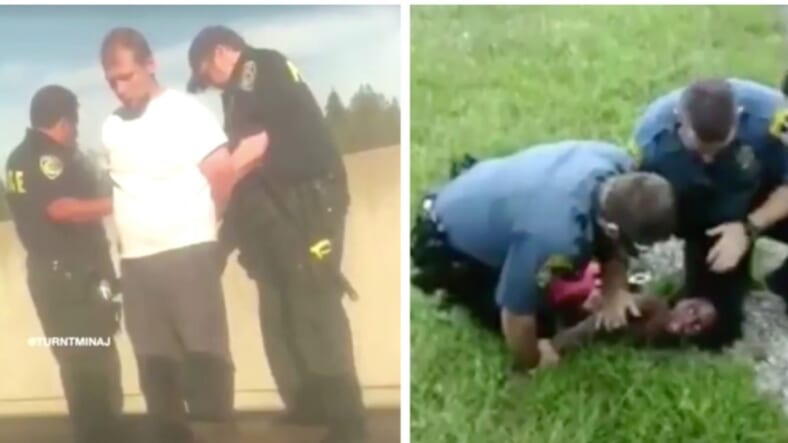 We’re at the point now where we’re just happy when we hear about law enforcement officers arresting people without anybody dying. But those of us who leave the house with melanin every morning can’t help but notice that the “proper” arrests aren’t quite as likely to happen with us.

Such is the case with John Cowell, who was arrested Monday  as a suspect following the stabbing of Black sisters Nia and Letifah Wilson on an Oakland, Calif. BART train station platform Sunday evening. Nia, 18, died from her wounds.

The attack seemed entirely unprovoked; race as a factor hasn’t been ruled out just yet. Accounts of Cowell’s personality from folks who know him suggest that he’s one of those perpetually troubled white dudes who wants to see the world burn and that murder was a natural escalation for him.

You’d think a guy like this might be carefully approached and pounced on by cops fearful for their own safety, yes? After all, Cowell is a convicted felon on parole. Well, it was fitting that Cowell was arrested at the Pleasant Hill BART station because it looked like a rather pleasant ordeal.

I’m sure he enjoyed a nice crispy chicken combo with upsized fries on his way to jail, much like Dylann Roof, whom the cops treated to a fast food meal after arresting him for slaughtering nine black people at a church in 2015.

Cowell’s arrest brings to mind that of Oscar Grant, who was also arrested at a BART Station, but only because of the infuriatingly sharp contrast: the unarmed Grant was shot to death by police in the early hours of Jan. 1, 2009. The last hours of Grant’s life were depicted in 2013’s Fruitvale Station, the first collaboration between Michael “Bae” Jordan and writer/director Ryan Coogler.

(Not for nothing, but the fact that a high percentage of the snitching-ass white folks are doing their bullshit in the Bay Area means I can firmly strike that region off my travel log for the foreseeable future.)

The optics of these arrests are entirely too disparate not to provoke justifiable anger among Black folks; that everyone you know over the age of 8 has a camera phone is the only real reason that shit that has been going on since time immemorial is finally being exposed on a regular basis.

It was a phone that caught Chikesia Clemons being roughly arrested by cops at an Alabama Waffle House in April, her naked breasts exposed in the process.

“Clemons is seen being wrestled to the floor by three police officers in what protesters and black right’s activists labeled as police brutality.” https://t.co/N1YDSFzsBJ

A phone caught grown-ass white Georgia cops holding down a 10-year-old Black boy trying to speak to his handcuffed dad.

This is an act of pure hatred. Hate is the only thing that could motivate this behavior on a child..pic.twitter.com/RwDrwKOGLI

A phone caught Eric Casebolt, a Texas cop, strong-arming a bikini-wearing black girl a third his size while his colleague aims a gun at a whole group of black kids at a pool party.

And, of course, there’s Eric Garner, whose final words, “I Can’t Breathe,” were added to  the Black Lives Matter movement’s lexicon in 2014 when police choked the unarmed man to death during an arrest for selling cigarettes.

Cops manage to let us down even when they aren’t arresting us: There’s the officer who chilled hard as all hell while Timothy Trybus yelled at a woman for wearing a Puerto Rican flag shirt here in Chicago (The officer “resigned”). There’s also the officer who felt the need to check the identification of the Black family minding their black-ass business at a North Carolina pool when Adam Bloom (who also lost his job) called the cops on them because he felt like they didn’t belong.

It’s as regular as the sun setting: a white man can have a bazooka strapped across his chest and he receives the kid gloves from police; a Black person has anything in their possession made out of matter and it’s a potential weapon. And heaven forbid we actually open our mouths to speak in front of the police…our lives literally hang in the balance.

From a retired NYPD cop. https://t.co/0Fc6GUhwry

There have been so many instances of us getting murdered or somehow perishing in police custody that I lose track. So, while Cowell and those who look like him continue getting that gold star, VIP police treatment, keep saying their names: Michael Brown. Philando Castile. Tamir Rice. Sandra Bland. And on and on and on.