They threw this mom in jail over a probation violation. These activists bailed her out.

Black Mama's Bail Out is helping women go home to be with their children this weekend. 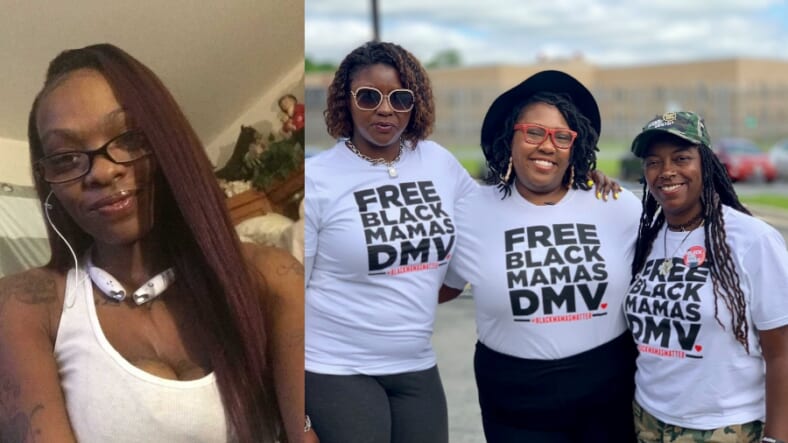 Shalice Johnson (left) is one of 308 women bailed out of jail thanks to activists like Samantha Master (middle) from Black Mama’s Bail Out. (Courtesy of Samantha Master)

While most moms make plans for brunches and outings with their children, two years ago, Shalice Johnson was preparing to spend Mother’s Day behind bars.

“I was empty,” Johnson remembers. “I was depressed. I was crying. So many things going through my mind. I felt lost without them.”

Johnson had been jailed for a probation violation.  The crime?  Bringing her three kids to the probation office with her.

“Children are not allowed in the office because of everybody’s charges and situation is different,” Johnson told theGrio. “There’s some pedophiles in there and they don’t want kids there for the safety of your children and the safety of other people.”

Johnson felt like she didn’t have a choice in the matter, and did the best she could under the circumstances.

“I didn’t have a babysitter. I was stuck between a rock and a hard place not reporting to my probation officer or have my kids in the system because I done left them to go report in,” she explained.

Feeling the pressure of the moment, she hoped for the best and brought the children anyways. Because of that decision, Johnson says she wasn’t allowed inside and technically missed her appointment.

As a result, she was jailed in PG Department of Corrections and had her bail set at $2,500, a nearly impossible cost for the mom of three.

READ MORE: Grandmother held in custody on $300 bail since July on misdemeanor charge dies in jail

To make matters more complicated, Johnson received a standard pregnancy exam as part of her inmate processing, only to discover that she was actually pregnant with her fourth child.

That year, Mother’s Day was like nothing she’d experienced before until a lifeline came through.

“My public defender came to my cell and was like, ‘There’s this organization that’s gonna bail you out for Mother’s Day. Now, I don’t know how real it is, but they are just saying that they got your name off a list,” Johnson says, remembering her first reactions.

“Is this really happening? Is this for real? Why are they willing to risk their money to have me on the streets with my kids? And they didn’t know me from anybody.”

Johnson was bailed out the very next day and home in before noon to be with her children.

Johnson is one of about 300 women who have been bailed out of jail by Black Mama’s Bail Out, an organization that’s part of a national movement to end mass incarceration. Organizers have rallied more than 20,000 donations generating $1 million in funding to pay bail for people who would otherwise languish behind bars until trial.

This week, they’ve already bailed out moms across the country in anticipation of Mother’s Day 2019 on Sunday.

READ MORE: The mom of one of Michael Jackson’s alleged victims felt ‘dumped’ when MJ got married and 5 other WTF moments from ‘Leaving Neverland’ Part 2

“Black women are some of the fastest growing populations of incarcerated people in this country,” says Samantha Master, an organizer with Black Mama’s Bail Out.

Master spoke with theGrio from a jail in the Washington D.C. area where she had been working diligently to bail out yet another mother.

“Moms are the glue that holds communities together,” says Master. “We see women arrested for everything from protecting themselves from their abusers, to sex work and survival ‘crime.'”

“Our record has shown that the majority of women we bail out their cases are dropped,” says Master.

Black love has been getting our people out of cages all week! Please RT & donate to help reunite a Black mama or caregiver with her children for #MothersDay: https://t.co/m0ObHOk1el pic.twitter.com/E6sFjqqyVt

Cash bail and electronic monitoring make for big business in the United States. In New Orleans, for example, Black residents paid 69 percent of all the court fines and fees imposed in 2015 totaling a whopping $2.7 million dollars.

The draining of resources and labor from Black communities via the court systems has strengthened the comparison to chattel slavery.

“During slavery when folks were locked up or when folks who were enslaved in the South Black people use every means necessary to get their people free,” says Stahly-Butts.

“We see bail similarly as an intervention we can make today to get our folks out of cages.”

For Johnson, the reunion with her children that year was a reminder of the power between a mother and her children.

“I couldn’t walk to the bathroom without them being attached to me. They hadn’t slept in days until mommy came home. I wasn’t sleeping without my children. Once I reunited with them it was just the best feeling ever.”

Learn more about Black Mama’s Bail Out and the National Bail Out campaign at nationalbailout.org.