The 26-year old tennis star sat down with theGrio to discuss her new partnership and her plans after the U.S. Open.

The U.S. Open has it’s chaotic and drama filled moments. One of them came yesterday when 2017 women’s champion Sloane Stephens, the 11th seed, was surprisingly eliminated from the game by 20-year-old Anna Kalinskaya.

Just days before the upset, the 26-year old tennis star sat down with theGrio to discuss her new partnership with Mercedes-Benz where she provides mentorship and pro-advice to a host of young girls in various New York City chapters of the National Junior Tennis & Learning.

“When one of us is affected, we’re all affected,” said Stephens standing amongst the bustling sounds of dozens of tennis-doubles happening in the background.

Stephens understands that tennis is one of those sports that’s not only mostly male-driven, but also money-driven, making it an activity many believe can’t be played if it can’t be funded.

“Of course, who that notion affects the most are African-Americans, Hispanics, etc. That’s just how it is and how it’s always been seen. So, I think being able to show people that it’s not just a rich sport and that anyone can play as long as the opportunity, the passion, the drive and hunger are there, there’s space for everyone to be a part.”

It’s that dedication to give women, particularly more minority women, the space to thrive in the seemingly exclusive sport, that led this world-class athlete to become an ambassador for the luxury car brand.

“After Stephens won the U.S. Open in 2017, it became a conversation on how she’d be a great fit for us,” said Monique Harrison, head of Brand Experience Marketing for Mercedes-Benz. 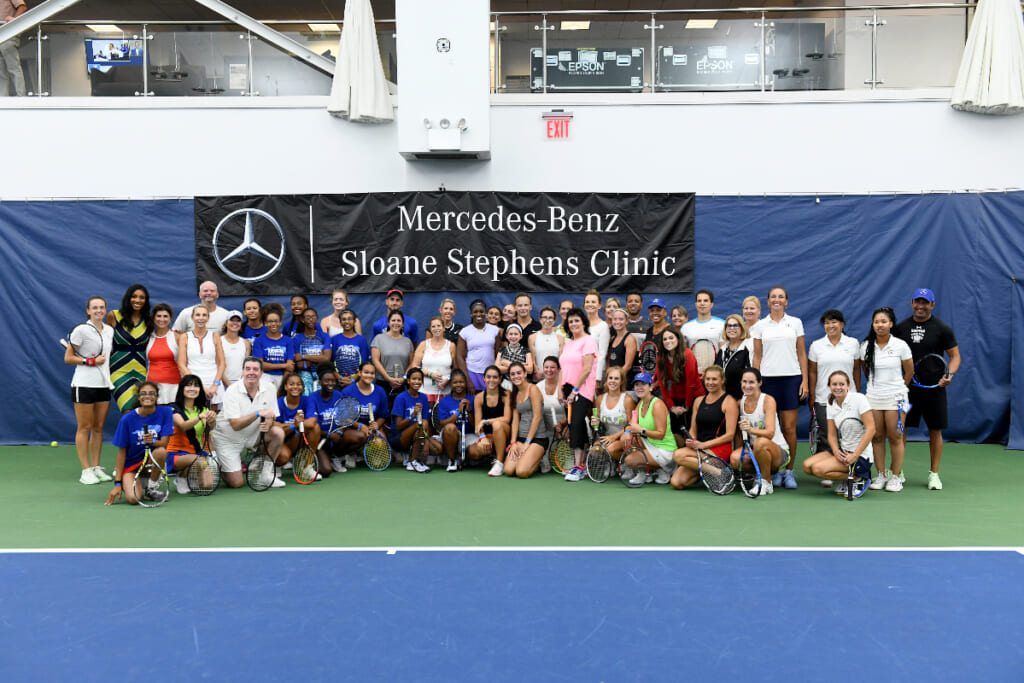 “We were certainly looking for someone who would pay it forward, and was as innovative as our brand. She became an easy one for us to have a conversation with because she matched a lot of our brand standards, ours matched hers, and when started thinking of our mantra, ‘the best or nothing’ it made perfect sense.”

Black on the line

Stepping onto the tennis scene nearly seven years ago with that riveting match against Serena Williams at the 2013 Australian Open, Stephens has long understood the responsibility she has as a Black woman in her industry.

It’s not something she takes lightly.

“There were of course those before me, but tennis has always been very handpicked when it comes to Black women,” said Stephens. “Either you make it or you don’t and obviously, with there being Venus and Serena, and Madison Keys, there’s so very few of us, so we make sure we stick together.”

Of course, this particular road hasn’t always been easy, even with the support of other Black athletes around her.

“It’s hard, but learning and growing through the sport and learning about myself and realizing that some things just aren’t fair has made me more comfortable with what comes with the territory,” she said.

Another aspect Stephens has had to cope with is her life, both on and off the court, playing out publicly for the world to see. The beauty, who you’ll often see posting on social media, said that keeping up with the many platforms has essentially become a second job.

READ MORE: Tennis player who criticized Serena Williams for not knowing who the number one women’s tennis player is should take a seat

“I very much think that social media is a business and you can control your narrative, what people see, and how much of yourself you give to the world. Since our jobs are so freely accessible on a platform, everyone can see what we’re doing all the time. You just have to manage it and find a balance and I think I’ve found a good one,” said Stephens who is also recently-engaged.

Good morning people! Don’t be rude, say it back 🌞

“Obviously, people talk shit on the internet with no accountability. They say whatever they want to say, and everyone has their own opinion, but everyone just isn’t going to like you.”

While she’s definitely not looking for approval from others, Stephens is actually her own biggest critic. Before losing to Russian pro, Kalinskaya, she was optimistic about doing better this season. Unfortunately, things didn’t work out in her favor giving up the match to Kalinskaya, who is the 127th-ranked player in the world and won a her very first Grand Slam match against Stephens.

Now, that the season is over for her, you can expect Stephens take some much-deserved time off.

“I’m going to be going on vacation and taking photos like Instagram girls, so when you see me posting a whole bunch of bikini photos, don’t be surprised.”

Blake Newby is a freelance writer and Howard University alum based in New York City.