EXCLUSIVE: Nathan Fluellen on why you should explore Africa right now

The host of' World Wide Nate: African Adventures' dishes details about traveling to the Motherland. 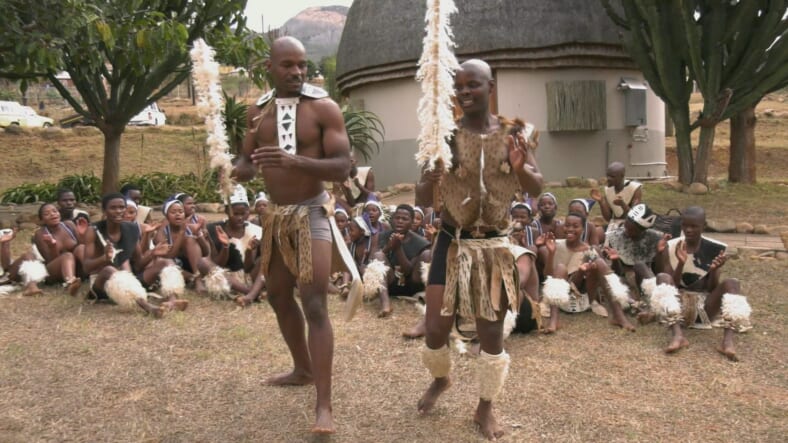 A trip to Africa may be more attainable than you think.

Nate Fluellen hosts the UMC show, World Wide Nate: African Adventures and offers viewers an inside look at all that Africa has to offer. The show just returned with nine new episodes that highlight his travels to numerous exotic destinations within the continent.

The series serves as a travel guide and reference for those curious about taking a trip to Africa. You’ll find out where to go, what to see, local delicacies, and cultural experiences travelers may want to be aware of and partake in.

Viewers can tag along as Fluellen hikes the mountains of the Democratic Republic of the Congo to the world’s largest lava lake, rappels alongside a 630-foot-tall waterfall in Lesotho, treks through the Rwandan jungle alongside silverback gorillas, swims with sharks in Durban, South Africa, and more.

Fluellen rappels alongside a 630-foot-tall waterfall in Lesotho. (UMC)

TheGrio caught up with the renowned travel vlogger to dispel some myths about the Motherland and find out how to make our dreams of an African vacay a reality.

“Ten years ago, I went to Italy with two of my friends who were second-generation Italians and they were so connected to the place their parents were from and so invested in the trip. I thought it would be great to go to a place and feel that same connection and be excited about my roots and my heritage,” said Fluellen. “I wanted to have that experience and promote travel to Africa and inspire people to see it and normalize it.”

Fluellen has been all around the world and experienced numerous cultures, but Africa is the one place that has evaded him. Not anymore.

“I feel very much at peace there and it feels like home,” he said. “I took a DNA test on an episode of the show and we will reveal the results on the season finale.”

He broke down some common misconceptions people have about traveling to Africa and insists many of the pictures painted by the media aren’t accurate.

“Africans are underestimated or looked over a lot because of what the media portrays and my goal is to uncover these gems of truth and show similarities and make Africa relatable to Americans. I wanted to show people these great representations of the culture,” he said.

“The media only shows certain parts of the continent so unless you go and see for yourself, you’re not going to get the whole story. When I look at CNN, there’s coverage of some type of controversy or war. There would be no images that represent anything positive or the beautiful experiences I have had there.”

Another thing keeping some folks from booking a trip is the notion that they won’t like the culinary scene.

“People think the food here is weird. They eat the same food we eat in the States. I have eaten delicious food and stayed at amazing, 5-star, luxury accommodations. I have interviewed women with food trucks that serve incredible hamburgers and people are shocked that there are food trucks there. It’s not that far fetched.”

While lots of people assume that a trip to Africa might entail dodging dangerous situations, Fluellen insists travelers are perfectly safe.

“People are concerned about safety a lot of the time and they still imagine seeing malnourished kids with big bellies and no water when they think of Africa. You do have to get some vaccinations depending on where you go. You may need to take Malaria pills for travel to certain parts of Africa as well,” he explained.

“If safety is a concern, you can always hire a tour guide from a company. You’re paying for them to show you a good time as well as the security. You can also inform the consulate of your arrival and departure dates so those are precautions the state department suggests when you travel to Africa.”

When it comes to the people you’ll encounter in Africa, Fluellen explains they’re not much different than the folks you may see in Chicago or NYC and we have more in common with them than one may think.

“I have had intellectual conversations with so many people there. Most people in South Africa speak at least three languages. The people are highly intelligent. You see the businessman or the hipster or the conservatively-dressed person. There’s a variety of Africans and a lot of times, people there look the way they look here,” he continued.

Need another reason to book a trip? Imagine being in a place where you’re NOT the minority for once.

“When you’re there, you look like you’re African. I don’t get weird stares or people who assume I’m American. That’s the beauty of it. I’m not an anomaly there. I’m not a Black man. I’m just there,” he said. “I can get lost in the crowd and be a fly on the wall and blend in. In Africa, we are the majority and that never happens in the States except when I was at an HBCU. Being in a place where white people are the ones who are the minority, it’s shocking and odd and they’re the ones who stand out. Capetown has a lot more white people.”

It turns out, planning a trip to Africa doesn’t have to break the bank and Fluellen encourages folks to do some research and find an option that fits your budget.

“There are a lot of deals that pop up online. A lot of friends have traveled to Africa for under $1,000. Our money is stronger there so you can catch good deals and plan a trip on a budget. Everything on the ground is very affordable once you get there.”

Fluellen is hoping that Black Panther fans will be inspired to take a trip to the real-life Wakanda.

“I want to show people the adventure that awaits in Africa as well as share stories that show the rich culture of Africa. Black Panther pulled different pieces from all over the continent and put it in the film so I would like to do something like a Wakanda treasure hunt where people can experience things they saw in the film,” he said.

“Watching the movie is a totally different experience if you can connect with what you’re seeing the screen. It’s about educating people on the beauty of Africa and the culture. It’s amazing to see how beautiful it is.”