The Central Park Five: 5 attorneys explain why the prosecution’s disgraceful case should be reviewed

The five boys who were convicted and ultimately exonerated of a brutal rape in 1989 are free, but that does not erase the prosecution's misconduct. A group of legal minds explains why. 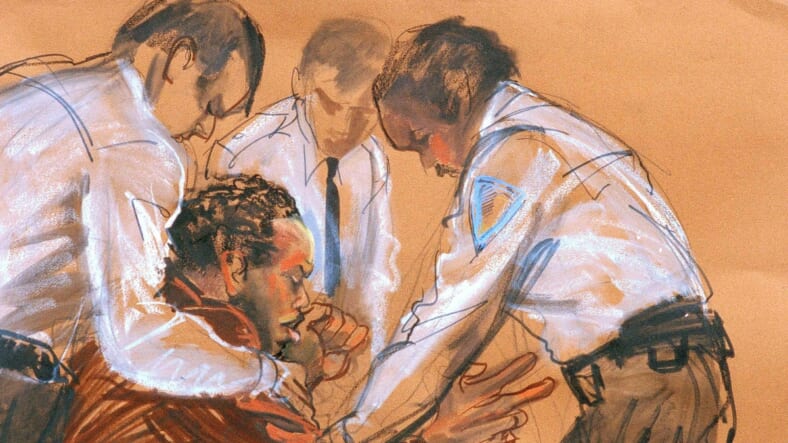 Court officers restrain Kharey Wise, 18, in New York State Supreme Court after he started screaming and crying during opening statements in the second trial in the Central Park jogger case in New York, Oct. 22, 1990. Now, five prominent legal experts determine how the unethical results of this case have impacted the criminal justice system over the last 30 years. This is an artist rendering. (AP Photo/Marilyn Church)

As Ava DuVernay‘s Netflix series, When They See Us gains traction and brings back discussion of the Central Park Five case, the focus has mostly been on what happened back then to the five teen boys who were wrongfully convicted of a horrible 1989 rape and systematically railroaded by a crooked criminal justice system that saw five Black scapegoats instead of innocent young men.

The case ultimately made those who were part of the prosecution’s team sought after, well-respected attorneys and criminal experts. Now that the series has shined a brighter light on the case, people like Linda Fairstein are feeling the heat. The retired New York sex-crimes prosecutor even reportedly tried to negotiate with DuVernay on how she was to be portrayed in the film including approvals over the script, something the director clearly wasn’t feeling.

Everyone has a strong opinion about how this will all unfolded including those in the legal profession who know the ramifications of the case and what type of precedent it has set.

TheGrio asked five prominent legal experts who have monitored the case since it first began 30 years ago and have thoughts about how it has affected the criminal justice landscape across the country. Some feel the prosecution worked towards a conviction of these Black boys regardless of the evidence (or lack there of) presented, while others say the odds were simply unfairly stacked against them.

Nonetheless, collectively everyone believes the prosecuting team bears some responsibility for overzealously pursuing the conviction they ultimately were granted, but pursued at the cost of true justice.

Here’s what they had to say.

Who wields the power?

“One of the central pieces of our work is trying to shed some light on the tremendous authority prosecutors have in the criminal justice system. This is an egregious example of prosecutorial misconduct, but this also illustrates that prosecutors hold the keys, who gets charged, and how to evaluate evidence. 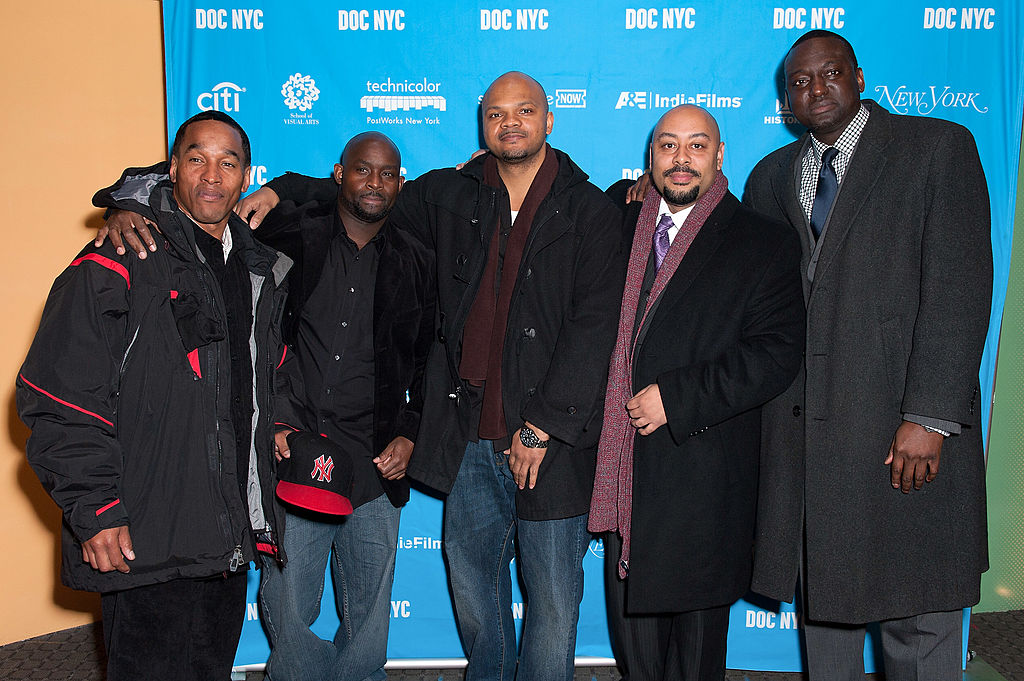 The team of prosecutors had the ability to stop this thing in its tracks. There were many instances where it should have been clear they were barking up the wrong tree. They felt they had the right guys and clearly had some pressure to bring someone to justice. Where race and class come in, these were the perfect suspects that no one was willing to vouch for.

“…It’s fair to say there’s a critical mass of prosecutors who continue to make what I believe are questionable decisions.”—Jason Williamson

Linda Fairstein has been getting attention a lot since Ava DuVernay’s film came out because she continues to deny that any mistakes were made by her or her office when there clearly were. The point is this is something that happens much too frequently and there’s nothing in place to hold prosecutors accountable, which is what we’re trying to do [at the Center for Constitutional Rights].

Of course, prosecutors are not a monolith. Particularly in recent years, there are more progressive prosecutors being elected. We’re trying to get people involved in voting in local district attorney races because they have so much power. I’m speaking with a broad brush, but it’s fair to say there’s a critical mass of prosecutors who continue to make what I believe are questionable decisions.” —Jason Williamson, Deputy Director of the ACLU Criminal Law Reform Project

“Before I went to law school, I was a paralegal on that case, sitting at the trial table representing Yusuf Salaam, so I remember this case well.

From my perspective, from where I was on the case, there was an interesting dirty trick played by the prosecution, but it wasn’t unlawful or unethical. It’s just the way the law works.

When they showed the [defendants] confessions to the jury, the names of the other defendants were all blacked out. The jury couldn’t see what the defendants couldn’t see, so the jury was left to fill in the blanks.

The other thing that was important was the judge presiding on the case. The fact that they got [Manhattan Supreme Court Judge Thomas] Galligan didn’t help at all. They once nicknamed Rikers Island “Galligan’s Island” because of the number of people he sent there.

Prosecutors do everything they can so that a successful defense doesn’t get mounted. The odds are really stacked against the defense counsel. They pulled out all the stops to ensure the kid’s sides of the story were not heard. They did everything the could to pretend that coercion didn’t happen.

“The key lesson here is that when you’re dealing with children as defendants, you can’t interrogate them them as you would adults. Young people will lie if they are afraid or forced. Prosecutors should know that.”—Vincent Warren

I would say there was evidence in this case [proving] that these kids did not do it, so it is hard to imagine the amount of energy they had to put into manufacturing a case that wasn’t true. Prosecutors need to do more to think about the balance of society. They used all the advantages they had from the very beginning.

The key lesson here is that when you’re dealing with children as defendants, you can’t interrogate them them as you would adults. Young people will lie if they are afraid or forced. Prosecutors should know that.

I really think they crossed the line. I can’t say they crossed an ethical line because I don’t have information that proves that, but I can say they played dirty even if it didn’t cross an ethical line.—Vincent Warren, Executive Director, Center for Constitutional Rights

“Obviously the movie has dug up some really intense emotions for a lot of people, myself included. However, from a legal aspect, there were lines crossed and ethical rules that were completely ignored.

I do believe the prosecutors failed those boys, and if the story is correct, the way it’s been portrayed I think they violated ethics as attorneys especially by coercing confessions. They should acknowledge that what they did was wrong. A lot of people say it should be openly investigated. If they’ve done this to these boys, who knows who else they’ve done this to? 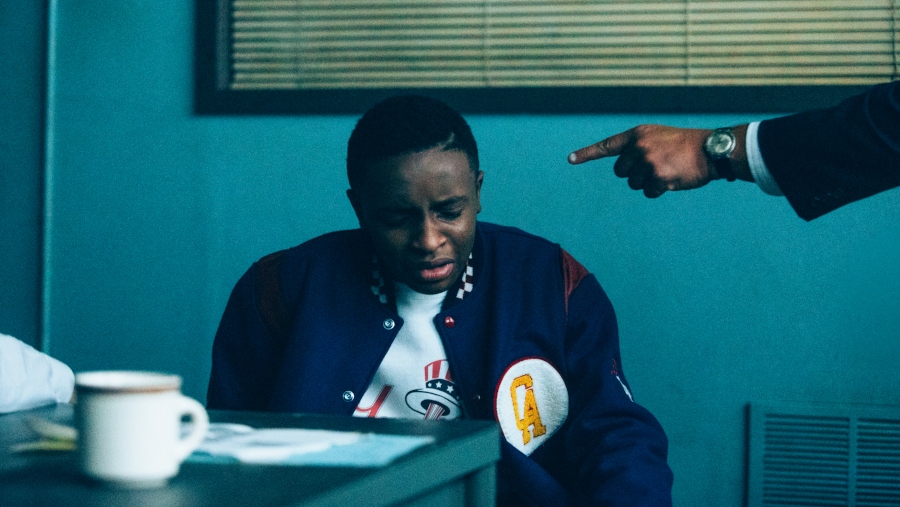 More people need to be educated on their rights including that they are not obligated to speak with police, and know to what extent the police can interrogate and what lines cannot be crossed.

This has a lot to do with the fact that they were kids, but also that their parents did not understand their rights.

Prosecutors are more set on getting convictions rather than finding truth. It’s more about politics and their bosses making certain calls rather than seeking the truth.

“There would have been an entirely different outcome if it were white boys and a Black girl.”—Cyprianne L. Rookwood

There was a rush to find out who committed this crime because of the media attention, but the political climate always plays a significant role in how they choose to proceed with a case.

“I would go as far to say that the prosecutor and the police in this case set out to respond to the press and sort of bargained away justice in the lives of young, Black men. The drive to solve the crime, to manipulate the timeline, to even create the timeline, the way in which the children and their families were handled to get the confessions, those all undermined and undercut justice.

Yes, the prosecution should be held accountable. We have to continue to hold people accountable for what they’ve done. I would have to question all of Linda Fairstein’s other cases. If she did this in one case, there could be a pattern of misconduct. 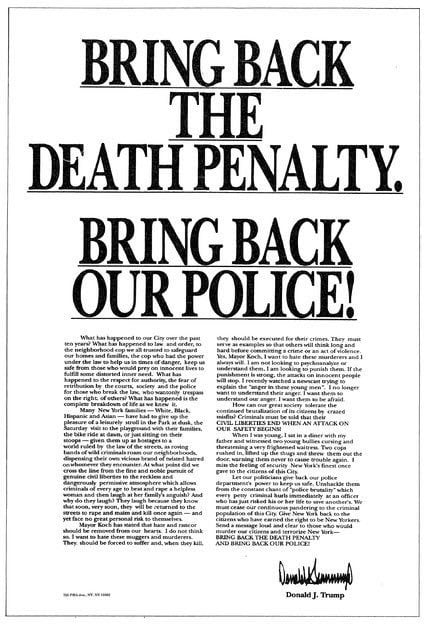 On May 1, 1989, Donald Trump took out full-page advertisements in four New York newspapers including the New York Times calling for the death penalty for the five boys accused in the Central Park Jogger case. (Courtesy of Twitter.)

“I would have to question all of Linda Fairstein’s other cases. If she did this in one case, there could be a pattern of misconduct.”—Tina Luongo

Of course it’s important that that [the Central Park Five] were exonerated, but how do you really pay back what they lost? Do I hope that every single prosecutor and every single police officer is looking at this and saying this isn’t going to happen again? Sure but unfortunately, I’m not sure they got the message.” —Tina Luongo, Attorney in Charge of Criminal Practice, The Legal Aid Society

A broken system of inequality

“It’s interesting to see the interrogation process those children were put through without access to counsel. In Chicago, they started putting public defenders in police precincts for this very reason because that’s where violations of constitutional rights begins.

READ MORE: When They See Us’ sparking calls for Linda Fairstein book boycott

Another issue is with prosecutorial misconduct and with police who see wrongdoing occurring, but turn a cold shoulder to it. The Central Park Five story is one we know about, but what about situations in small towns in Alabama, Mississippi and Arizona? We never hear those stories.

False or coerced confessions remain a huge issue within the criminal justice system although, since the Central Park Five, there have been efforts to advance and improve interrogation methods like better recording.

Nonetheless, there are still systemic issues. What are we doing to look into the cases those prosecutors have tried since that time? They walked away to have successful careers, but what if we could reopen their cases, what would we find?

Then there’s the role the media played and how it shaped the trial. As a country we have to honor the presumption of innocence. The media, however, can convict people before we allow them to have their day in court.

And, of course we can’t ignore the issue of race. When that’s a factor it seems all of our constitutional safeguards go out of the window. We have to review policy changes and hold everybody responsible.

“…when 90 percent of people [on trial] are represented by public defenders, it creates a system of inequity.”—April Frazier Camara

Finally, theres a lack of resources in public defenders offices is a national crisis. How many people go through cases without effective representation? Again, if this is happening in New York City, what is happening small towns throughout the rest of the country?

Madison J. Gray is a contributing editor for theGrio.com. He has written in the past on issues of justice in urban America, including cases like the Central Park Five, whose members he interviewed in 2013. He also interviewed Raymond Santana for theGrio last year. Follow him on Twitter @mjgraymedia.