OPINION: Tekashi 6ix9ine is a five-part lesson in the problematic reality of modern day hip-hop

A look at the rise and demise of one of the hottest artists today. 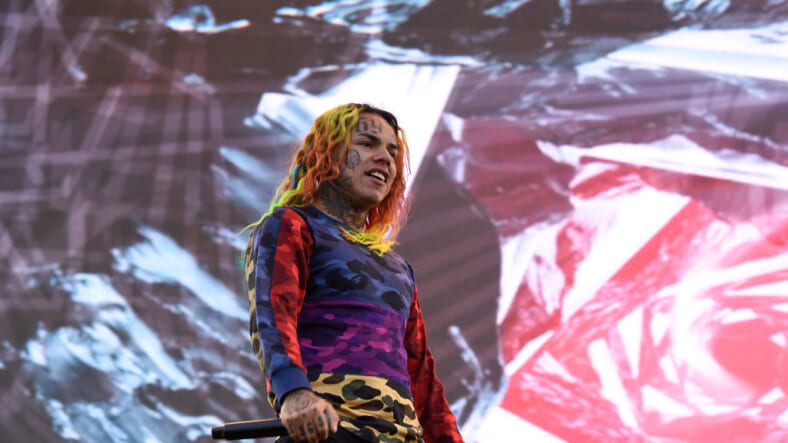 Tekashi 6IX9INE performs at Made in America Music Festival on September 1, 2018 in Philadelphia, Pennsylvania. (Photo by Arik McArthur/FilmMagic)

The code is above hip-hop.

Just look at any gangster flick. Whether it stars Pacino, Dinero, or Tony Soprano, all of them will tell you that “snitching” goes against the code of the streets.

While there are many street codes that should not be violated, few have more weight in hip-hop than the one that requires you to button your lips. Rap song after rap song include warnings of the social exclusion that comes from not minding your business, being loose with the mouth and/ or ratting to the cops. And even though hip-hop is now the most popular genre of music in the world, by origin, each vibration within the music is drenched in street culture.

It’s a way of life that in the early 70s transformed gang culture to create spaces for the DJ, the emcee, the dancer and the graffiti artist to exist. These young artists needed safe spaces to relish in their identity in ways that a gang-saturated New York City did not. Challenging the violence and replacing it with creativity seemed to be a solution. Still, even if you weren’t connected to that gang life, the same rules applied because the code is essentially a community standard.

Unfortunately, no one was kind enough to tell that bit of information to Daniel Hernandez, the overly tattooed, unicorn-haired, Brooklyn rapper otherwise known as Tekashi 6ix9ine. 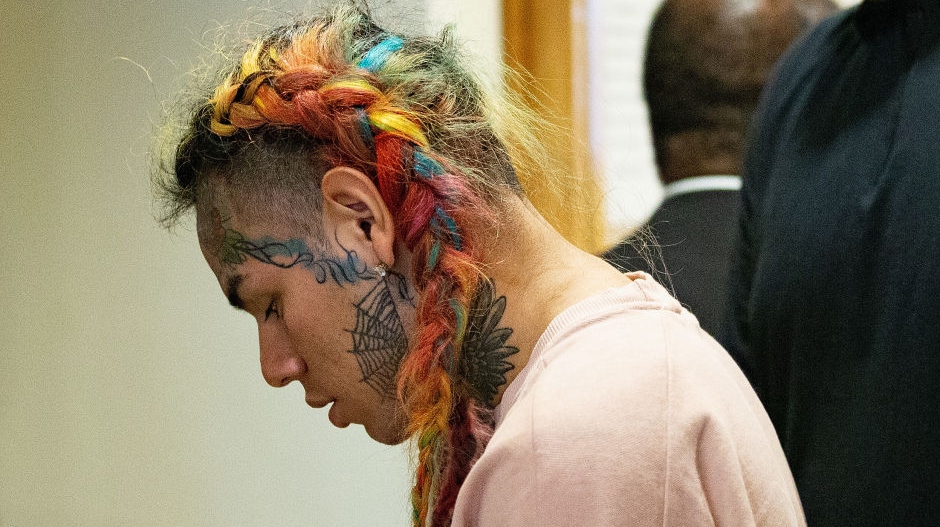 By skipping Hood 101, his so-called friends set his 20-something behind up for the hardest life-lesson that this generation of rappers will ever see. In January, the rapper pled guilty to racketeering conspiracy and eight other charges, and faced a minimum sentence of 47 years in prison. To understand how he got here, one must review his story.

Born of a Mexican mother and Puerto Rican father, Tekashi’s dad was murdered when he was 13-years old which set his world on fire. He started acting out, dropped out of school in the 8th grade and started selling drugs to support his mother and brother. In no time, he landed in Rikers Island prison. While there, he hooked up with the Nine Trey Bloods gang, a subset of the Bloods.

Now, TMZ is reporting that upon completion of his testimony on Thursday against his former Nine Trey Gangsta bros, 6ix9ine says that he plans to continue his rap career once he gets out of prison, without the help of witness protection. Instead, he’s going to hire security guards who will work 24/7 to protect both himself and his family at all times.

Perhaps not the smartest move since there’s no guarantee that the hip-hop community will welcome him back. Here are five lessons learned from really evaluating the 6ix9ine case that could leave hip-hop forever changed.

Lesson One: You Can Never Be a Poser

Now that 6ix9ine has testified against his former manager and several members of the Nine Trey Bloods gang, everyone is wondering how did he turn on his peeps so quickly? Well, the history is he was never really down with them in the way he made it seem.

Over the last two years, he built up a level of trust within their family and gained privileged access to their illegal and violent business dealings. He morphed into the 6ix9ine caricature with a splash of crimson red gang vibrato. When everything hit the fan, he cracked under pressure and cooperated with the federal government telling them everything they wanted to know and more.

In exchange for his testimony, he dodged an almost 50-year prison bid, proving he was never really about that kind of life. He stepped into this role to reach the goal of rap music success. Gang culture is not just popular in the street, it’s also bankable as young white people from the suburbs vicariously live through the images of the rappers they see online and support their projects. Being connected to these gangsters gave 6ix9ine validity— and opened up Billboard’s swinging doors.

Lesson Two: Everyone Wants To Be in a Gang

As heads continue to roll, what are some of the ramifications from 6ix9ine’s testimony, how will it affect him and what can others glean from this whole debacle?

At some point, it became more than just a money grab for both parties (Tekashi and the Bloods). They truly started to believe that they were friends. For the Bloods, they got sloppy and for Tekashi 6ix9ine, he got comfortable.

Studio life. Successful records. Lots of money. Who could blame them for finding in each other camaraderie? As a child, 6ix9ine yearned to belong, a feeling that is not unique since acceptance is something that every human needs. Before noses go up and disdain descends, consider why people join Black Greek letter organizations or HBCUs. Think about social clubs, Jack & Jill and the Boule/ Links. The overwhelming aggregators are identity, fellowship, brotherhood/sisterhood, protection, and power.

Lesson Three: The Government Will Use Anyone

While many are focusing on Tekashi 6ix9ine, he is not the most interesting person in this case. In fact, it’s time we take a deeper look at his driver, Jorge Rivera, who actually gave the most damning testimony and shot some of the video evidence in the case.

According to VIBE, he became an informant after U.S. Immigration and Customs Enforcement officers nabbed him for being in the country illegally. His testimony further revealed that he would receive a 5K1 letter giving him leniency on his deportation.

READ MORE: In wake of drive-by shooting, Chuck D says Kanye is too old to be hanging out with Tekashi 6ix9ine

All year, we have heard horror stories about the detainment camps at the borders, but here we have a case where someone, considered an undocumented immigrant, is allowed to stay and live freely amongst us as long as he spies on a rapper and his crew. For years, New York rappers have talked about the hip-hop police, but this takes it to an entirely larger level.  The government will bend all kinds of rules, with no problem, to entrap rap artists, who are deemed disruptive and controversial.

Tekashi 6ix9ine was calling himself the “King of New York,” with only two or three songs out, and maybe one year of mainstream success. Megastar rappers lined up to be next to him. Nicki Minaj recorded her lead single on her new album with him and 50 Cent tapped him as his “son,” co-signing a lot of his mess.

The media seems to never get enough of him. He had a way to make people, whom he repulsed, to fall in love with what seemed like a brilliant, trolling and obdurate attitude. He became a hero for the underdog, representing nothing but the attractiveness of fast-finding wealth. And hip-hop ate it up.

READ MORE: Snoop Dogg jokes about Tekashi 69, and drags R. Kelly into it

In 2019, the humble beginnings of the culture are almost forgotten. Indeed, hip-hop was born from gang culture, but those gangs are now star-studded. When Afrika Bambaataa re-organized the Black Spades in the South Bronx, they had no aspirations to be on TV or stunt for likes on IG. Now, the rappers and their songs (Tekashi 6ix9ine’s songs in particular) are motivated by promoting beef between one another. That is what made him King. He seemed to be what people wanted in a New York rapper: tough and street. New York was duped because he has proven that he is neither of those things.

Lesson Five: Social Media is Not Our Friend

Social media pushes forth messages which creates a groundswell tsunami of information like waves that overwhelm your soul. Tekashi 6ix9ine took advantage of the media and social media to ascend to his mega-stardom. Unlucky for him, it’s the same tool responsible for his ultimate demise.

Veterans in the culture could see the dinks in his armor because he talked about it online. The court system could put one-and-one together, not just listening to the things on his records, but also by going through his social media accounts: Instagram, Snapchat, Twitter, Facebook and YouTube where he has circulated his threats, his gang activity (real or fake) and highlighted bad actors in the movie of his life. All of this is currently contributing to his fall and will serve as a metric to determine, what if anything, can the hip-hop learn from this case.

Yes, we know that snitching is bad, but the ultimate lesson taught by the rise and demise of Tekashi 6ix9ine is that self-identity starts with truthfulness.

Tekashi has not been truthful with the public or himself about who he was. It is unfortunate that such a brilliantly charismatic and marketing mind has been wasted. People will continue to debate whether or not he can still have a career once he’s released from prison, live safely amongst his beloved fellow Brooklynites or if his legacy is forever tarnished. We have to dig a bit deeper here and understand that keeping it real is at the core of hip-hop and because Tekashi never did, he was easily able to turn snitch and lose the very ticket that he values so much: a seat at the cool table.

Nicole Duncan-Smith is from West Philadelphia born and raised, and in the playground is where she spent most of her days. Currently, she serves as a licensed minister at The St. Paul Community Baptist Church, and lectures on Hip-Hop as a viable love language to teach the Gospel. She is the founder of Haymakers Presents Battlecon, the first battle rap convention. She is a wife, a mother, a candidate for the Daughters of The American Revolution (go figure) and a contributing editor at theGrio.