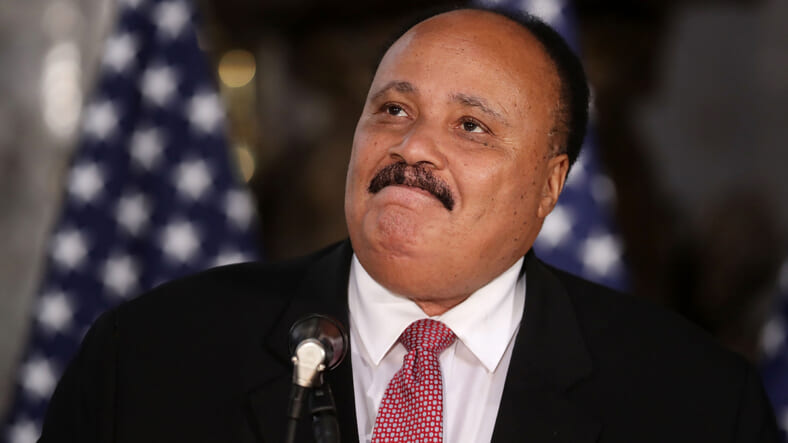 Martin Luther King III addresses a ceremony to mark the 50th anniversary of the assassination of Dr. Martin Luther King Jr. in Statuary Hall at the U.S. Capitol April 12, 2018 in Washington, DC. The House of Representatives memorialize the day that Nobel Peace Prize and American civil rights leader King was killed while supporting a sanitation workers strike in Memphis, Tennessee. (Photo by Chip Somodevilla/Getty Images)

The significance of August 28 to Black America is severe and multi-dimensional. On that night in 1955, a group of angry White men entered a house in Money, Mississippi, intent on, and ultimately successful at, kidnapping and lynching a 14-year-old boy named Emmett Till for allegedly whistling at a White woman.

Eight years later, barely 24 hours after the spirit of W.E.B. Dubois vacated its earthly shell and joined the souls of Black folks in the ether, Dr. Martin Luther King Jr., John Lewis, and others stood at the footsteps of the Lincoln Memorial for the March on Washington for Jobs and Freedom, addressing over 250,000 demonstrators about “a dream.”

This August 28, another gathering at the National Mall will commence. This time it will be with Dr. King’s son and namesake, Martin Luther King III, who will brave the shadow of the country’s 16th president to address the lack of rights for the disenfranchised.

Following in the footsteps of Rev. King is daunting for anyone, but for his firstborn son, it’s a birthright. Evident when he earned his degree at Dr. King’s undergraduate alma mater of Morehouse College, or when he stepped in his father’s shoes as president of the Southern Christian Leadership Conference from 1997 to 2004.

Together with Al Sharpton and his National Action Network, they will gather the nation together with the “Get Your Knee Off Our Necks March.” Although the event will take place live at the Lincoln Memorial, much of the participants will take on this national call to action virtually, due to COVID-19.

The double diagnoses of two glaring pandemics disproportionately afflicting Black Americans over the last six months is not lost on King, nor was it on his father over five decades ago.

“My father used to say ‘Our nation is ill.’ Unfortunately, that resonates more than not,” Mr. King told theGrio in an exclusive interview. “Not to focus on the negative, but when you look at conditions — in our community in particularly — constant shootings of African-Americans by police is beyond epidemic.”

Black Americans have been subjected to brutality from law enforcement since the days when officers were simply known as overseers. But with the killings of George Floyd, Breonna Taylor and Ahmaud Arbery, millions have now said, enough is finally enough.

Friday’s rally will feature words from King III, Sharpton, and family members of Floyd, Taylor, Arbery, as well as Eric Garner and Jacob Blake. They will stand united to demand that the nation fulfill, as Dr. King said 57 years ago to the day, its “sacred obligation” to Black citizens, and make good on the “bad check” of racial equality it passed off.

“The goal is to focus on police brutality and misconduct,” Mr. King explained. He hopes the march will remind the country that unprovoked acts of violence against Black individuals have lasting, generational effects.

“There’s absolutely zero accountability by the community — and I don’t mean Black people, I mean the community in general; the businesses; that means the elected officials,” Mr. King said. “Police officers have to have latitude to do their jobs, but you ought to treat people like you wanna be treated and that’s not what is happening.”

Mr. King feels that if you can’t appeal to the conscious of the lawmakers, lobbyists, police unions and corporations that give them a sense of invincibility, hit them where it will hurt the most — their wallets, with a large scale, indefinite “economic divestment” from White businesses, and diverging funds to Black-owned businesses.

“[Black people] spent over a trillion dollars on this economy last year,” King said. “When we decide to exercise our buying power elsewhere, then corporations will come and help us address our cause.”

Mr. King recognizes how much White-owned companies, such as Gucci, Burberry, Wal-Mart, Neiman Marcus, have subliminally influenced Blacks to pledge blind allegiance to their bottom line and asking 47 million Black Americans to boycott them en mass is a hefty task.

“We’ve got to figure out how to get the maximum number of people to engage, because this is a plan that we really have not used, at least not recently,” said King. However, he has the benefit of familial precedent to show that it is possible, via the 1955 Montgomery Busy Boycott.

“Black people chose not to ride buses in Montgomery for 385 days. 60 percent of the ridership was Black folk. At the end of that 385 days, there was a serious deficit with the bus company. There were some who, perhaps, wanted to do the right thing in terms of integrating the buses, but it was the fact that they were losing money that got them to change.”

Aside from providing a platform for the bereaved families of the slain unarmed, King and Sharpton are intent to use the march as a catalyst to get laws on the books.

“What we hope to come out of this is two pieces of legislation, to start,” Mr. King said. “That’s not just where we want to ultimately end up.” The first of those legislations, The George Floyd Justice in Policing Act, has already been introduced.

“United States Congress passed the George Floyd Police Reform Act, but the US Senate has done nothing.” King hopes that the march will also inform the importance of civilian review boards that will help foster more accountability from the proper sources.

“We need to have civilians engaged in the process,” King said. “It’s great the police department have an internal affairs department, but you can’ t investigate yourself. Not really. If something happens with us, we go out there and get an independent authority.”

The second is the John Lewis Voter Rights Advancement Act. Voter suppression of Black Americans has been in vogue since the turn of the century during Reconstruction. The late activist Rep. Lewis helped initiate the Voting Rights Bill after the Selma marches with Dr. King in 1965.

Read More: John Lewis declares ‘now it is your turn’ in posthumous NYT op-ed on justice

It’s come up again as the USPS had initially made convenient reform that required removal of mailboxes, and Tennessee quietly passing a law that could lead to certain protesters being stripped of their right to vote. According to King III, that’s just the tip of the ice burg.

Read More: Meet the Black man who could have saved the US Postal Service

“The state of Florida voted for felons once they’ve paid their debts to society to be able to vote,” King said. “The state is now saying, if you owe money to the state, you still can’t vote. The Supreme Court validated that. Now, that’s a poll tax!”

The United States often asserts itself as being a democracy by which all others around the world are measured. With voter suppression and apathetic Black youth feeling the futility of the process, King III has the numbers that show otherwise.

“Out of 172 democracies, the United States votes at 139. 138 countries voted at higher levels than us, and we’re supposed to be a great democracy,” said King. “A vote-less people is a powerless people. That’s what my father said.”

With a crucial election coming this November, Mr. King has emphasized the importance of getting new, youthful representation in government as an important foundation to provoke change.

“I think it’s important that young people run for office,” King suggested. He uses Rep. Alexandria Ocasio-Cortez (D-N.Y.) and activist and Democratic congressional nominee Cori Bush (Missouri) as examples of the kind of progressive, young, homegrown voices that are needed in politics to help change the narrative.

“You got to have people who have a love for the community. You can’t address a community unless you really love it, in my judgement. And that love means that you want help rise all boats.”

In the midst of the division of the White House, King III can appreciate that some youth may wonder why bother getting involved if we’ve been marching since the 1950s and we still have to march today. Well, he evokes some wisdom from his other mammoth parent, activist Coretta Scott King: